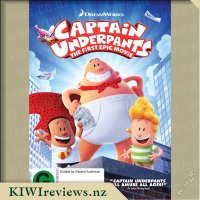 Disclosure StatementFULL DISCLOSURE: A number of units of this product have, at some time, been supplied to KIWIreviews by the company for the purposes of unbiased, independent reviews. No fee was accepted by KIWIreviews or the reviewers themselves - these are genuine, unpaid consumer reviews.
Available:
December 2017

George and Harold are fourth-grade BFFs who love dreaming up funny pranks. One day, they accidentally hypnotize their principal into believing he's a dim-witted superhero named Captain Underpants. But when the new schoolteacher turns out to be a disgraced scientist bent on ridding the world of laughter, George, Harold, and Captain Underpants must band together to stop his evil agenda!

My children were incredibly happy to receive the Captain Underpants DVD to review - being that only one of the three had seen it at the movies! We decided as a family treat we would watch in what they call "movie theatre'' style - lights off, curtains closed and with popcorn!!

The blurb from the back tells a little of the story of George and Harold - who are pranksters, of about my oldest daughters age. They love dreaming up new and funny pranks, which, as they are about to find out - can go really really bad!! George and Harold accidentally hypnotize their principal with the help of a cereal box prize - the 3D hypno ring, (cereal box prizes were more common in my own childhood than now!), and he totally believes he is a real Superhero, who is here to stop evil and is named Captain Underpants!

As most parents know - anything involving toilet words, underpants, funny noises and the like will be hilarious to kids, so I knew they would find this funny. I was absolutely pleasantly surprised and delighted that it has a level of humour for adults too (admittedly my fart loving husband did find it funnier than most might!) - making sitting through kids movies that much easier (thanks Dreamworks!!) I am not going to ruin the story for you - but honestly, hand on heart - this is a movie I would (will) watch again - in fact we as a family did - the following day.

The movie has a run time of about 85 minutes - perfect length for older and younger children both. I really do not have a bad word to say about this movie! It exceeded my expectations in all cases - and has definitely made me re- think whether tighty- whiteys are ACTUALLY cool!

Score: 9.8
Product reviews for listing 6074: P.S I Love You
Directed by Richard LeGravanese

Holly Kennedy is beautiful, smart and married to the love of her life - a passionate, funny, and impetuous Irishman named Gerry. So when Gerry's life is taken by an illness, it takes the life out of Holly. The only one who can help her is the person who is no longer there. Nobody knows Holly better than Gerry. So it's a good thing he planned ahead. Before he died, Gerry wrote Holly a series of letters that will guide her, not only ... more...