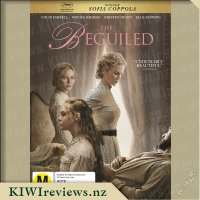 Disclosure StatementFULL DISCLOSURE: A number of units of this product have, at some time, been supplied to KIWIreviews by the company for the purposes of unbiased, independent reviews. No fee was accepted by KIWIreviews or the reviewers themselves - these are genuine, unpaid consumer reviews.
Available:
29th November

The Beguiled is an atmospheric thriller that unfolds at a secluded girls boarding school in Civil War-era Virginia. When a wounded Union soldier, Corporal McBurney (Colin Farrell), is found near the school, he's taken in by its headmistress, Miss Martha (Nicole Kidman). As the young woman provide refuge and tend to his wounds, the house is taken over with sexual tension and dangerous rivalries when McBurney seduces several of the girls. Taboos are broken and events take an unexpected turn in this gripping and haunting thriller also starring Kirsten Dunst and Elle Fanning.

This was a movie I was dying to see at the theatre, but I never managed to catch it there, so I was keen to see the DVD when it was released. The film won the best director at the Cannes film festival, so I knew it had to be high quality.
The film is set in Virginia in the middle of the civil war, the setting, costumes, and day to day tasks are so period correct it is worth watching the movie to see an accurate portrayal of the daily lives of American's in that time period. One of the reasons I wanted to see this film beyond the historical setting, was the fact that the lead cast is all female. The actresses themselves are all well known lead actresses in their own right, and I wasn't disappointed, Nicole Kidman is very believable as the head mistress, and Kirsten Dunst is well cast as a southern belle. Our hero come villain in the film is played by Colin Farrell and I must admit I really disliked his character at some points during the movie.
The film itself unfolds well, the characters are introduced, and the drama and passion begins to unfurl. I must admit to finding myself waiting for something exciting to happen for a while before it did, the build-up was perhaps a little to fast, or perhaps I was to impatient?
This film is many layered, and I think it is important that the director was a woman, in the film the females all change in the presence of a man, and I wonder if a male director would have drawn the audience in such a way as to show the changes that took place in the dynamics of the relationships, because of the presence of a man, and how in the end the reminder that friendship and womanhood is more important than a man.
I may have turned a few male readers off with that summary, but I watched this with my husband, and other than it being a little slow, he enjoyed it, I don't think I would classify this as a 'chick flick' I just wanted to pay tribute to the wonderful job the director and actresses did of portraying the many layers of themselves and the dynamics of their school.
I do think this film is well worth a watch, especially if you enjoy period films.

David and Paige Walling and Terry and Cathy Ostroff are best friends and neighbours living on Orange Drive in suburban New Jersey. Their comfortable existence goes awry when prodigal daughter Nina Ostroff, newly broken up with her fiance Ethan, returns home for Thanksgiving after a five-year absence. Rather than developing an interest in the successful son of her neighbours, Toby Walling, which would please both families, it's her ... more...