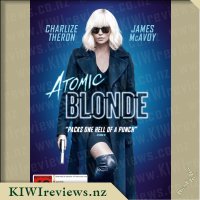 Disclosure StatementFULL DISCLOSURE: A number of units of this product have, at some time, been supplied to KIWIreviews by the company for the purposes of unbiased, independent reviews. No fee was accepted by KIWIreviews or the reviewers themselves - these are genuine, unpaid consumer reviews.
Available:
Available November 2017

Oscar-winner Clarlize Theron stars as elite MI6's most lethal assassin and the crown jewel of her Majesty's secret intelligence service, Lorraine Broughton. When she's sent on a covert mission into cold war Berlin, she must use all of the spy craft, sensuality and savagery to stay alive in the ticking time bomb of a city simmering with revolution and double-crossing hives of traitors. Broughton must navigate her way through a deadly game of spies to recover a priceless dossier while fighting ferocious killers along the way in this breakneck action-thriller from director David Leitch (John Wick)

As far as spy films go, until recently it's safe to say that the genre had gone stale; offering either rehashes and reboots of the always classy and perfect James Bond, or the always running away from explosions style of Mission Impossible's Ethan Hunt. The films stopped providing anything new and became stale, until such films as Spy Movie and the Kingsman franchise breathed a breath of fresh air, injecting humour into the genre. Atomic Blonde continues that trend of redefining the spy genre, with a more realistic take on being a spy.

Atomic Blonde strips away the glamorous cars, seductive models, private planes, expensive cocktails, tailored suits, sci-fi technology, and choreographed dancing (I mean fight scenes, where the protagonist receives minimal to no injuries). You get a realistic idea of what the life of a spy may be like; not knowing who to trust, the realisation that your mission must go on even if compromised, as your government will easily burn a liable asset, the knowledge that everybody you contact is either using you or at risk from people that want to use you. It's a brilliant piece of work that has you trying to determine each characters loyalties, but never providing enough downtime to be able to properly consider the facts; another more realistic aspect of time-sensitive matters.

Visually, the environments are dark and gritty, and the characters are quite rightly standoffish and aloof. Attention to detail is evident, and the physical toll of constant combat can be seen on the face of the protagonist (see attached pic) as the film progresses.

Casting-wise, I've always enjoyed Charlize Theron. While she acted very well, aesthetically, she wasn't altogether convincing; she looked out of place right from the start, and that is something that doesn't seem to fit with "MI6's most lethal assassin" as it's hard to be an effective assassin when you stick out like a sore thumb. On the other hand, James McAvoy's portrayal of the MI6 Berlin station chief, who is heavily entrenched in the intelligence game, is superb. he almost blends into the surroundings in his own home and pulls off the "proper" spy look.

Atomic Blonde does come with its fair share of faults; mainly the constant laboured action throughout the film, but in the end, it is a very enjoyable film with a strong female protagonist that kicks ass. A refreshingly gritty; an almost modern European adaptation of Quentin Tarantino's Kill Bill.

When an airline strike grounds these total strangers together in Paris - and they're forced to share the last ... more...