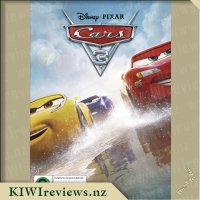 Blindsided by a new generation of blazing-fast racers, the legendary Lightning McQueen (voice of Owen Wilson) is suddenly pushed out of the sport he loves. To get back in the game, he will need the help of an eager young race technician, Cruz Ramirez (voice of Cristela Alonzo), with her own plan to win, plus inspiration from the late Fabulous Hudson Hornet and a few unexpected turns.

Proving that #95 isn't through yet will test the heart of a champion on Piston Cup Racing's biggest stage!

"Racing data: tire pressure, downforce, weight distribution, aerodynamics. The racing world is changing." This really is the basis for the whole film, McQueen is at the top of his game and then someone younger, faster and better (what he himself once was) comes along and takes his place as top dog. McQueen is joined by new character Cruz, who becomes his trainer as he attempts to take top place again, wanting to finish racing on his terms and not on that of his new sponsor, which is a similar enough theme to many people in real life.

Cars 3 focuses well on McQueen is feeling about this new and pretty awkward stage of his life and just how it makes him feel and how he copes with the way his life seems to be heading. At the same time it does well with Cruz, giving us an insight into what she wanted from her life but how she was the opposite of McQueen and missed what she saw as her shot to race and became a trainer instead. I like how this film shows that there is always room for personal growth and he is so different to who he was back in the first film. However what I enjoy most is that Cruz just looks like all the rest of the cars, she wasn't feminized, given big eyelashes etc, just like the rest of the female characters, though at the same time that's a sore point as in this film there were only five females versus the numerous males...

The special features give some insight into the movie, I like that they studied actual car races so that they could make this as authentic as possible (given the sentient cars and so forth). There's a short clip for Miss Fritter, that one reminds one of the supposed celebrity enorsed products which was fun, and another clip which talks about the aim of not overtly feminising Cruz and how they spoke to the woman who work in the same building as to what they might like for the character. Last but not least is the usual short film, this one called Lou, a lovely little short which was both funny and sweet, another win.

My kids and I all enjoyed this movie and it's sure to be watched again and again.