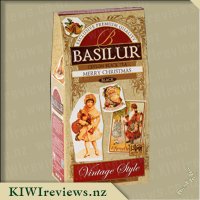 Disclosure StatementFULL DISCLOSURE: A number of units of this product have, at some time, been supplied to KIWIreviews by the company for the purposes of unbiased, independent reviews. No fee was accepted by KIWIreviews or the reviewers themselves - these are genuine, unpaid consumer reviews.
Available:
via online store and at selected quality retail outlets 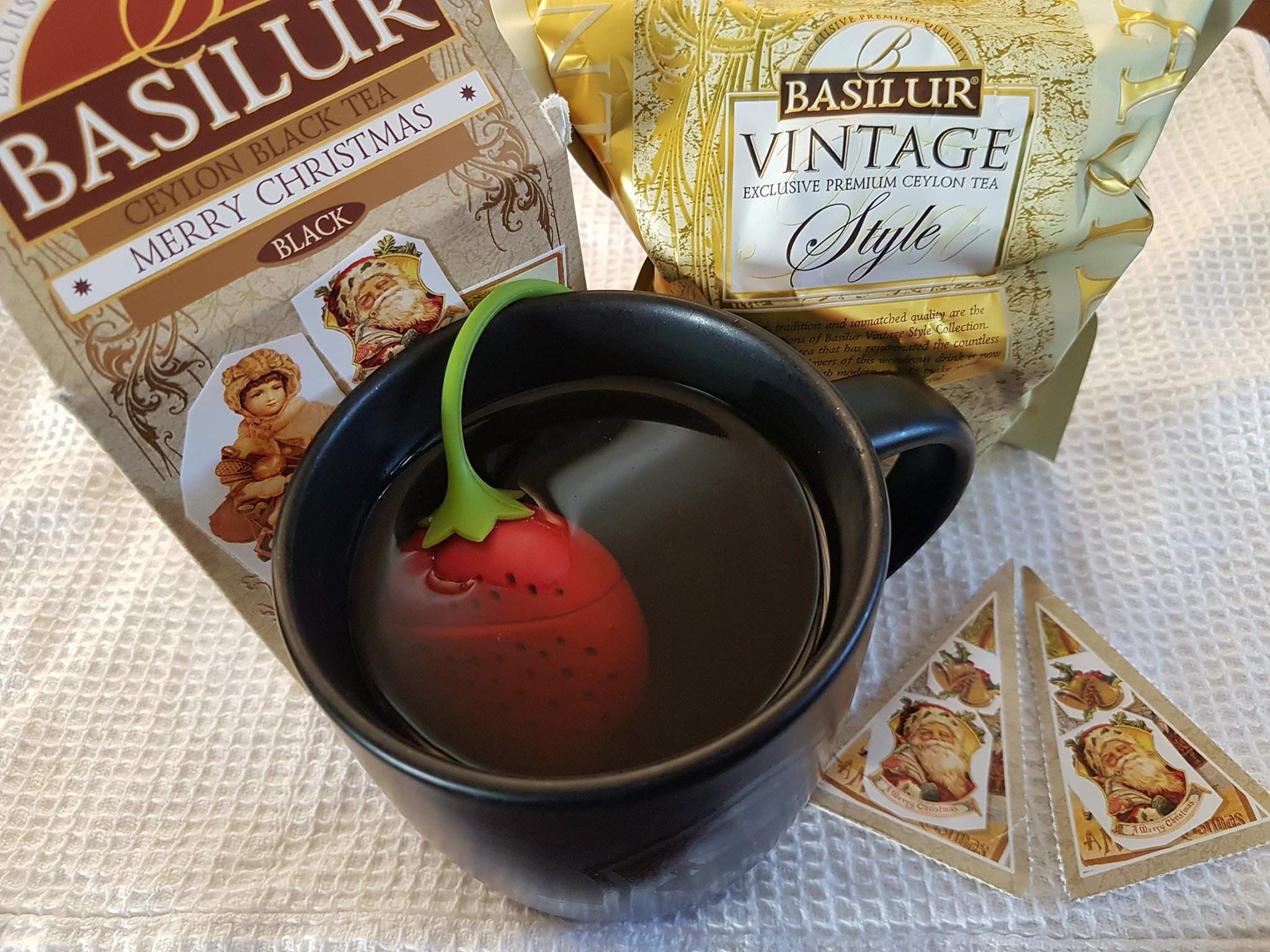 Christmas is well and truly over but that doesn't mean I can't relive the festiveness with Basilur's Merry Christmas black tea. The first thing that sticks out as usual with Basilur's range is the exquisite packaging covered in artwork and very stylish design.This packaging also includes two little tear-away triangle drawings of Santa which I assume can be used as Christmas decoration's and I have also come across these on other Basilur tea packaging. The tea itself is stored in a handy resealable bag which is also covered in elegant design and as a whole, this product shows just how sophisticated it is.I have read that other people have had problems with the resealable zip not locking airtight but I didn't have this issue at all.

I took out a portion of tea, filled my infuser and let it sit in boiling water for roughly 10 minutes.The tea has a nice bold darkness to it and the aroma's wafting off the tea smells almost citrusy which is odd due to it not containing any real citrus element. It has a very fruity smell to it also and that reflects in its taste too. I tried it without sugar to begin with and I'm glad I did as I found it to be slightly sweet by itself so I then added only half a teaspoon of sugar and it took it to its limit of sweetness for me.This would have to be the strongest flavoured Basilur I have had to date.

When I tipped out the infuser I realised maybe I had made a mistake when I saw the fruity piece's I had wasted. I picked out a piece of apple that was still in the infuser to try and thought I had missed an opportunity of having this still in the tea so I made up another tea and added the pieces of apple to the drink.To my disappointment, it didn't change the drink really at all other than feeling little pieces of apple every now and then while drinking.

To conclude this is a very refreshing tea with bold flavours and I also look forward to seeing what other flavours Basilur have in their range as I have come to find they mix some very interesting fruit combinations into their teas.

I had seen this on KIWIreviews and wondered what does a Merry Christmas taste like. I was excited to see that I had been given this to review and my inner child really loved the packaging, the Christmas pictures and the box was just so cute. I did however struggle with the size of the print for the information as I found it really hard to read such small print, lucky I don't have any allergies that I know of.

I was also given another flavour to taste and I noticed that once the box is open that the packages look exactly the same so I have to keep the boxes to be able to tell them apart. I opened the outer box easily enough and the foil packaging but when it came time to close the resealable tab it stubbornly stayed open, my daughter gave it a go and was successful in getting it closed.

I brewed the tea and invited my daughter and parents to be my guinea pigs. I usually struggle to smell delicate smells but this I could smell and it really made me want to taste to see if the flavour delivered on the promise, it did. I enjoyed this from the start but my parents had other comments, my dad added some lemon juice to his after the first sip and he said it was a lot better, my mum said it was ok but she enjoyed the smell more than the taste and my daughter said it was really nice so I guess the resealable foil that doesn't close properly is not going to be a problem as the tea will be drunk long before the tea goes stale. 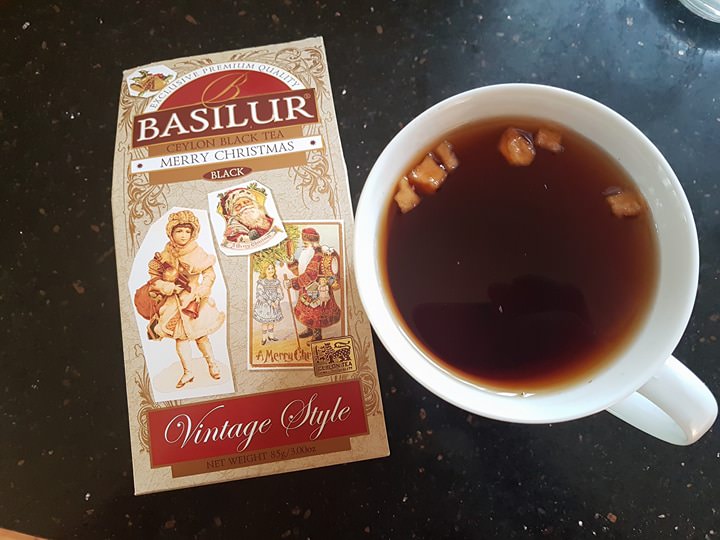 Another odd sounding flavour, "Merry Christmas". Well, maybe not so much odd sounding, but lacking descriptions of the actual flavour of the tea. As is the case with the other items in the range, this product comes with some rather traditional styled Christmas imagery and colours, with an abundance of gold and deep reds in the colour scheme. The packet has a tab to open it at the top of the packet, but it proves difficult to open. Scissors would make an easier job of it. Inside the box, we have a beautiful pale yellow and gold resealable foil packet. Interestingly it has the exact same design as the green tea that I also reviewed, so you need to either keep them in the boxes, or mark the foil packs, or you could easily get them mixed up as the packs are identical (wouldn't want to have to keep opening and sniffing each pack to distinguish between each one).

The foil pack is easy to open, but the resealable zip, doesn't seem to be 100% airtight on this one. Most of it worked, but there was a 4cm gap at the end that unzipped itself. Not the best if you are wanting to keep the product fresh. The tea has a very smooth aroma to it; sweet and musty most likely due to the vanilla ingredient. Compared to the green tea which was composed of large fleshy leaves, this black tea has long, thin, stringy leaves to go along with the chunks of apple. Due to the clearly visible different size and shape of the components of the tea, each cup could have a slightly different profile, depending on what you end up with in your pot/infuser (it's very easy for the apple pieces to fall off the spoon when you scoop).

The tea is a black tea and as thus, it is very dark in colour and can be quite bitter. You can tell all of the different components; the smoothness of the vanilla, the sweetness of the apple, the tingling sensation from the ginger, and the rich fragrance of the safflower. The apple and vanilla linger long after the tea has been drunk. Definitely a strong, flavoursome tea, and for someone that prefers green and herbal teas, it's a tea that I need to add my milk and sugar too. 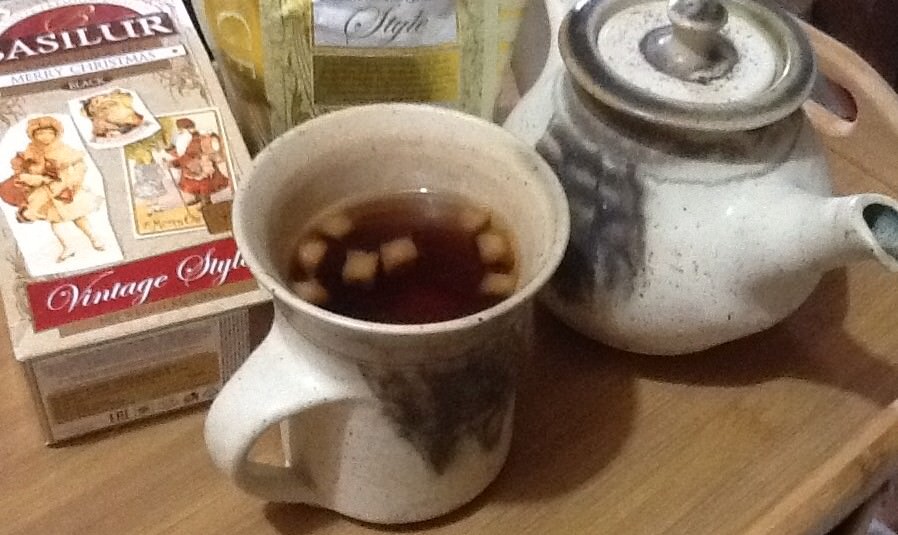 What a wonderful smell when I opened the packet! The heady, sweet smell of apples and spices, reminiscent of Christmas mince pies and rich port chasers. An even bigger surprise came when I looked at the leaves inside. There were large pieces of apple and smaller red spiky leaves which I assumed were safflower. I was so intrigued that I removed one of each and ate them to see what they would taste like! The apple was just that - dehydrated and no doubt ready to expand when the boiling water hit it. The safflower is something I had never tasted on its own before, and it was pleasantly pungent. It had a sweet, floral taste which lingered in my mouth for several minutes after I had sampled it.

Well, with playtime over, I set to making a proper brew so we could try it. I had just one helper on this occasion. She is a connoisseur of herb teas so it would be interesting to see what she thought of this one. Having already tried several other teas in the Basilur Christmas range, I was sure I would like it too. I told her that these teas need to be taken neat (ie without milk) to get the best effect. There was a horrified pause as she regarded me in total horror before she spluttered "As if!" Oops - I had forgotten already that she had probably drunk many more herbal teas and tisanes than I had ever done.

We left it to brew for five minutes or so before pouring. The scent was almost as strong as it had been earlier when we opened the packet, still with that strong scent of apple. When we poured, we were delighted to see that the safflower and black tealeaves stayed obediently in the bottom of the teapot while the apple pieces floated out the spout and arranged themselves on the surface of each drink. They looked so cute we had to steel ourselves to drink them. Those apple pieces had plumped up nicely and were fun to catch as we drank. Apple bobbing in miniature!

The only negative for us was the inner packaging. Although it is marketed as having a resealable inner, this one did not work at all. The outer seal was intact so luckily the contents were fine, but I had to decant the remaining leaves into an airtight container so they could maintain their freshness. None of the other varieties I have tried had a faulty ziplock closure so it was probably a fault just with this batch. However, we did not let that spoil our overall enjoyment of what is a very pleasant and tasty drink.

Take your taste buds back in time and enjoy the indulgent flavours of deep golden caramel and old-fashioned butterscotch. Fresh Double Caramel Milk has been created in collaboration with one of New Zealand's favourite foodies, Chelsea Winter. Together, Chelsea and Lewis Road founder Peter Cullinane, have developed a rich and creamy milk that delivers a double dose of nostalgia with every ... more...