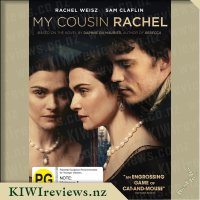 Passion overtakes reason in the dark and layered romance - based on Daphne du Maurier's classic novel - starring OSCAR Winner Rachel Weisz. Believing his mysterious, beautiful cousin Rachel (Weisz) murdered the man who raised him, Philip (Sam Claflin), a young Englishman, plots revenge against her. But, despite evidence that Rachel might be a killer, Philip finds himself falling deeply in love with her in this visually stunning, tension-laced film.

My Cousin Rachel is a twisted tale of love, loss and obsession. The movie is based on a novel of the same name by Daphne du Maurier and features Sam Claflin (of Hunger Games films) as Philip, an orphaned Englishman who is raised by his cousin Ambrose. They live an idyllic life in Devon until Ambrose, suffering from ill health, is advised to go to warmer climates and travels to Tuscany. Through letters, Philip discovers Ambrose has met and fallen in love with his cousin Rachel (Weisz). Soon after marrying her, Ambrose falls ill and begs Philip to come save him, believing that Rachel is poisoning him.

Discovering that Ambrose is dead and Rachel nowhere to be found, Philip returns to the estate, convinced Rachel is evil and solely responsible. A while later, Rachel announces she is coming for a visit and, intent on getting revenge, Philip is stunned to discover that she is intelligent, sensitive, elegant and beautiful. He soon falls under her spell but can she be trusted?

Unfortunately, I thought My Cousin Rachel was dull, lacklustre and the film's pace was too slow for me. I often found myself losing attention and although I wasn't expecting an action film, it seemed to drag in places. Weisz as Rachel is plausible and can shift between being flirtatious, deadly serious and morose with speed. Claflin manages to play an impetuous Phillip well although I thought they lacked passionate and sexual chemistry between the pair. I found the ending disappointing and underwhelming although others may love it.

The main highlight of the film was the cinematography which was stunning and the shots of Florence and the Cornish Coastlines made me want to book a holiday!

From the Academy Award winning creators of Toy Story and Mosters Inc., it's time to take time to dive into FINDING NEMO - a hilarious adventure that takes you into the breathtaking underwater world of Australia's Great Barrier Reef.

When Nemo, a young clownfish, is unexpectedly carried far from home, his overprotective father, Marlin, and Dory, a friendly but forgetful regal blue tang fish embark on an epic journey ... more...