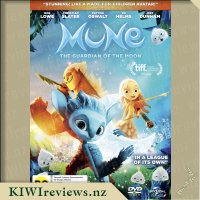 In a land far away, the sun and moon shine only thanks to heroic Guardians. But when the most unlikely little creature, Mune, is chosen to be the new Guardian of the Moon, a series of unfortunate events occur, leading the sun to fall into the hands of a disgraced Guardian seeking revenge.

Teaming up with Sohone, the swaggering new Guardian of the Sun, and Glim, a fragile yet witty girl, Mune and his friends must embark on a magnificent adventure to rescue the sun and save their world. If he succeeds, Mune will be a legend forever more.

This was a movie that I had never heard of until it came up as a possibility to review. I liked the cover image and the blurb about the film had me interested, I like stories that put their own little take on the balance between sun and moon. When my kids saw this they were immediately asking to watch it that night when their friends were over, so we did, we also watched it again a couple of days later, this time with my mother. The plot is pretty typical, bumbling outsider ends up in a position of power that they didn't want, has to team up with macho other 'power' and quirky person who joins the team to help save the day.

This film has two different types of animation, one which is used in the majority of the film, and then another, more simplistic style, which is used in a moment of storytelling but also when Mune and Glimm enter the dream realm. Both styles were lovely and beautifully rendered and I could watch this again for the animation. There were moments, with the voice acting, where it felt a bit over acted, which took away from the film a little bit but not enough to ruin the film. There were a couple of names that I did recognise but without googling I couldn't tell you who voiced which character, which for me was refreashing.

When it comes to plot, it wasn't anything new. Necross who started off good and was corrupted (funnily enough made me think of Moana, though this initially was released in 2014), the attempt at revenge and it not working, the bumbling minions etc. I liked how they did Glimm, though she did do the expected in some ways, she was still a very clever character. I loved Mune, not only does he look lovely but they also gave him animal like qualities with his movements and he'd do a cute head tilt and fawn like noise with it, loved that. My other favourite part of this film is the temples, there was one for the sun and one for the moon, and they were both temple and giant, living creature, would have loved to have seen more of them.

My three kids enjoyed this film heaps and all have declared that this is one film they want to hold onto.

Based on a true story, this is about the Irish journalist Veronica Guerin (Cate Blanchett), a reporter for The Sunday Independent, who exposed some of Dublin's most powerful crime barons and drug lords in 1996. But later that year she was gunned down by assasins hired by the same criminal drug lords she exposed.