Mune: Guardians Of The Moon review Our world's greatest heroes become our fiercest enemy when Optimus Prime launches a mission to save Cybertron by destroying Earth. Now Bumblebee and Cade Yeager (Mark Wahlberg) must lead the Auotobots against their former ally in the ultimate battle to save mankind from annihilation. 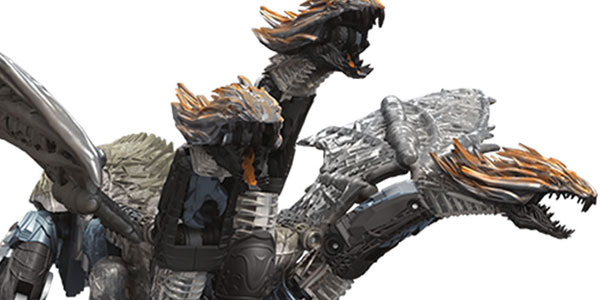 Okay let's be honest Transformers (the first one) was amazing, it was new and exciting and introduced us to the Autobots and the Decepticons - it left you wanting more. Then came the sequels Revenge of the Fallen, Dark of the Moon, Age of Extinction and you dreaded what would happen next, they were big and over the top and if I was truthful they were just so plain-old awful that even Mark Wahlberg could not save them... then came this movie - Transformers: The Last Knight - and it has breathed some life into the dying series.

The opening sequence lets you know straight away it has a big budget as you have special effects galore, and as bodies are being flung through the air, you are reminded straight away that Michael Bay does not do things in halves. Watching the Dark Ages war between the British and the Saxons is raw and gritty and you end up scratching your head as to what they have to do with the Transformers. Luckily the answer does not take long and you find out with the aid of Anthony Hopkins that Cybertron used to be in a war with earth and in order for it to mend itself it needs to make earth suffer... in a nutshell.

The great thing about this movie is you are introduced to new Transformers and they all have unique personalities. They are funny and some are just deranged but they are all individual and are just so neat to watch, especially my new favourite, the butler Cogman, plus Bumblebee gets more screen time. Then there is the addition of Transformers Creatures including a three-headed dragon (which is not nearly as well done as the Game of Thrones one) but it is still rather neat and the whole thing just equals a whole lot of entertainment.

I find with all Bay movies that he tries too hard to complicate them and adds oo much plot that it ends up getting a little too large for itself. You have the action sequences where so much is happening all at once that it gets a tad confusing, I could not keep track of who was fighting who and when it came to it I could not tell the good guys from the bad guys half the time. The screen is just a blur of activities. Then you get the sequences that really do defy reality like when Cade was using the drones as stepping stones it just gets a little silly. The movie started off with so much promise that about an hour into it my husband said 'this is not too bad' but then it gets spoilt with trying to outdo the story.

The other issue with the movie is it just drags on. 150 minutes is a very long time and by the end of it, I found I just wanted it to finish. The action sequence/battles are time-consuming and I personally think it could have been condensed some. Instead of the major end fight, I would have preferred to see more transformers expressing their feelings or opinions or even watching Cogmin fighting with Anthony Hopkins instead of the rubbish over-the-top fight scene.

I honestly do not remember the last two Transformer movies except they were terrible, but I am sure with this movie I will remember a couple of scenes. Not as good as the first one but I think it is probably better than the sequels and yes it does leave me wanting to watch another movie.

Set in the vast snow kingdom at the top of the world, Arctic Tale is a real-life adventure from the people who brought you March of the Penguins. Join narrator Queen Latifah as she follows two very different arctic creatures, Nanu the polar bear cub and Seela the walrus pup, through exciting and harrowing struggles for survival.

Armed only with their natural instincts and mothers' guidance, these inspiring animals face countless trials and challenges in a beautiful icebound world that is rapidly melting beneath them.