ProdID: 7759 - HAMLET: The Video Game (The Stage Show)
Performed by The Court Jesters 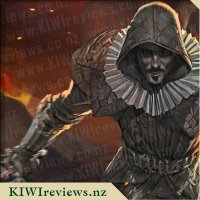 Disclosure StatementFULL DISCLOSURE: A number of units of this product have, at some time, been supplied to KIWIreviews by the company for the purposes of unbiased, independent reviews. No fee was accepted by KIWIreviews or the reviewers themselves - these are genuine, unpaid consumer reviews.
Available:
Oct 4th - 7th

You've Never Seen The Bard This Bad-Ass!
Think Ophelia as a robot, King Duncan being greeted with a hand grenade, Yorick as a zombie, and you've got HAMLET: The Video Game (The Stage Show).

The show re-imagines Hamlet as an interactive video game, blending the Prince of Denmark's soliloquies with mortal combat, zombies and a final boss battle. The audience calls the shots so that each performance takes a different route. Every level must be conquered until Hamlet's father's death has been avenged!

Writer Simon Peacock brings his experience as a voice director for some of the biggest games in the industry including Assassin's Creed, Far Cry, Prince of Persia and Deus Ex to HAMLET: The Video Game (The Stage Show). This innovative show combines the best of video games with the language and tortured plots of The Bard's most performed play.

A master of stage and screen musical composition as well as video games, musician Hamish Oliver provides a live backing track to the show. A large LED screen makes a digital backdrop for the show complete with playful animations and video game reward screens. The show goes as far as giving the audiences the ability to watch on as characters are customised on screen. AV designer Andrew Todd has flawlessly created video game graphics, right down to the perfect fonts, proving a real love for video game culture. 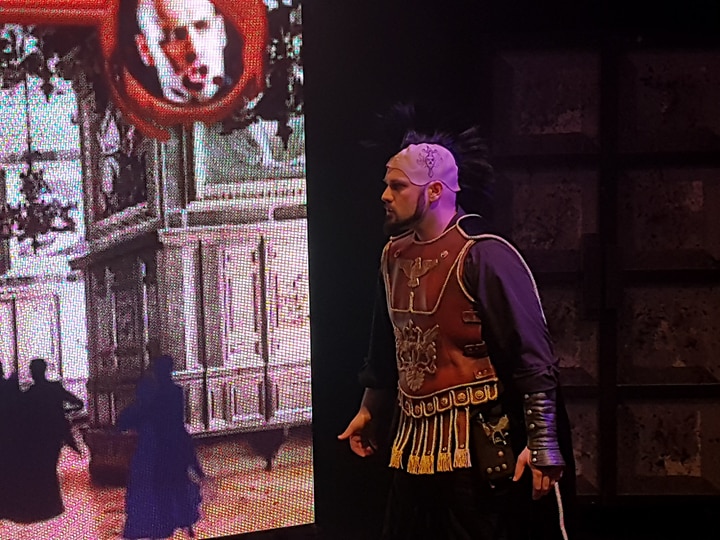 Hamlet: The Video Game (The Stage Show). The name alone is simultaneously descriptive and incredibly vague. What the cast and crew are trying to achieve is incredibly ambitious; a live interactive stage show of a video game style adaptation to Shakespeare's Hamlet. The level of organisation and attention to detail is immense. The show involves minimal set pieces and cast, instead, using a myriad of props and wildly variable costumes.

Heading around the side of the Aotea Centre to the Herald Theatre, the layout of the seating in the venue was in itself a positive aspect. The tall room has the seating configured in a manner that allows everyone a full unobstructed view of the stage area, as well as offering the actors and actresses direct unhindered access to the front row of the audience. This is incredibly important in a stage show such as this; a show that uses visual cues for comedic effect.

The opening scene serves as the prologue and uses a mix of acting and pre-recorded on-screen footage. In this case, the audience can appreciate the look that the cast were attempting to achieve, but due to the angle of view from the tiered seating, and the distance of the actress from the screen, the scene failed to properly sync up. Looking at the first few characters to appear on stage, their costumes were over-the-top and visually very different from each other. While initially odd, it served a dual purpose of allowing the three-person cast (that's right, Dan Bain, Kathleen Burns, and Jared Corbin are the only actors/actresses involved, excluding the music person) to play multiple characters without causing confusion as to whom they were, and allowed the inclusion of gaming characters and references.

Advertised as a "video game" adaptation, the show employs a veritable plethora of gaming references in its visual aids, props, costumes, and wordplay within the dialogue. As a casual gamer, there were many laugh-out-loud moments with the incredibly campy, cheesy, and often forced incorporation of gaming sources, and they provide a nod to the audience with each one to ensure we are all aware of the concentration of references from Mortal Kombat and Call of Duty, to Angry Birds and Tetris. It went far beyond the dialogue, with many nods to the general attributes of gameplay; tutorials, character customization, save points, loot drops, combos, achievements, even the movement of the characters are all covered in some way in the show.

The cast do brilliantly. It took me longer than I care to admit to realise that there were only three cast members involved. Corbin's size and aggressively passionate demeanour makes him the perfect lead for the show. His ability to switch from aggressive fighter to rambunctiously handing out cheesy one-liners to the audience was enjoyable to watch. Burns manages to catch the audience's eye with her infectious smile, femininity, and meticulously chosen amount of bared cleavage, while concurrently berating game developers for limited choices in female body types and armour choices.

Admittedly, the crowd interactions are rather limited. There are three times during the show where the audience are called upon, and looking back, "calling the shots" is rather an over-exaggeration. Even in such a case as the character customization portion of the show, it's obvious that not all the options would actually work, and the cast will play and manipulate the audience to get the results that they need to continue on.

It's cheesy, but it's fun and definitely a different take on the same old story. The repurposing of the set pieces was very well done, with every surface of each piece efficiently used. The characters costumes being so outlandish and over-the-top that the character can be played by multiple cast members (even by different genders). It's incredibly well thought out. Not a "serious" play, by any measure, but definitely something that I'd recommend checking out.

The Top Gear team are at it again in a new DVD presenting eight of their most anarchic challenges to date.

Our favourite trio take to the road as well as the skies in a new set of gruelling challenges that take the concept of driving to the very limit. They jet off to Japan for the latest in their world-renowned epic races, and have a massive motoring shootout against the Germans when Sabine and her co-hosts are ... more...