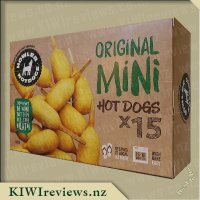 My family are fans of Howler Hot Dogs and have tried them all thanks to KIWIreviews. I saved the mini variety until last. It was a lazy dinner with just me and the girls in front of the TV. I threw the mini dogs in a roast dish to cook along with some frozen chips. I loved how dinner could be cooked without me having to do anything except pour some sauces into bowls. This meant I could watch TV with the kids and get up in the ad breaks. Best of all dinner was ready in less than 20 minutes. They were nice and crispy so it was pleasing to see they didn't have to be deep fried to be enjoyed.

We loved the hot dogs and polished off the whole box between the tree of us. Miss 7 was so keen to eat them that she burnt her mouth on one straight from the oven. That didn't stop her from eating more and telling me how delicious they were. Miss 9 loved the mini dogs so much that she gnawed every last bit of batter of the sticks. The addition of the sauces meant I could have some spicy chilli while the kids had their favourite tomato sauce.

Although we had these as part of a meal these would be fantastic as a party food. I can imagine having a group over to watch the rugby and the mini dogs being passed around. The other great use would be for toddlers that couldn't handle a big hot dog. These mini dogs are three to four adult bites so would be perfect for smaller appetites. It is a versatile product and one that I would buy regularly to have on hand when needed.

There's something about mini sized food items that really appeals to young children and adults alike, so I knew these hot dogs were going to be a hit. Infact these hot dogs caused so much excitement amongst my nieces (9 and 5) when word got out that I had them sitting in my freezer I received a phone call with them begging on the other end to come around for dinner, to which I of course agreed to!

So along with the Peri Peri Chicken hot dogs I cooked these up for the dinner, with the idea of the mini's being for the children and the Peri Peri Chicken hot dogs for the adults. The cooking instructions for the mini hot dogs couldn't have been easier I placed the entire contents of the box onto a tray lined with baking paper and then left them to cook for 15 minutes, turning once during the cooking process, this amount of time was more than enough for these tasty looking morsels, which when removed from the oven smelt delicious and looked amazing, I had 3 little people bouncing around in excitement waiting to try them out. With 15 in a box there was enough for the children to have 3 each, which left 6 for the adults to sample aswell.

Served on a tray with a variety of chicken bites, hot chips, raw vegetables and a variety of dipping sauces - tomato, BBQ, mayonnaise and sweet and sour the children thought it was like Christmas, and Miss 9 declared that it was "a great dinner", Miss 5 after her first bite said they were better than the ones she gets at lone star, and Miss4 couldn't stop smiling and saying "yummy yum yum little hot dogs in my tum". The girls all loved trying out the different sauces with their hot dogs but all agreed tomato was best (of course). The older 2 girls finished all 3 of there hot dogs, however Miss 4 could only eat 1 so the other 2 were put away in the fridge for the next day, she made it very clear that they were hers and no one was to eat them!

The adults enjoyed their sample as well and found them to be a tasty little snack, everyone thought they were much better than those you get at the Fish and Chip store as they were actually nice and meaty, and the batter was light and golden and well cooked through. We decided that these would be great to have a box of in the freezer for when the 3 girls are together again as it is a nice treat for them all to enjoy and a much healthier option than getting them takeaways! We thought these would also go well at a child's birthday party, the small size being perfect for kiddie food as they are small enough that they could probably finish off a whole hot dog rather than leave most of it on the stick. The adults said they'd also make a great snack for when having a few drinks and watching the rugby.

Although i'm unsure of the price I am going to say I would definitely buy these again for birthday parties, a great product, in the perfect size and best of all New Zealand made!

My kids are big hot dog lovers so I was super keen to try these! We had recently bought a deep fryer so broke that out to cook these up. We did them as part of a "Homemade fish and chips night" served up with chips, fish bites and various dipping sauces. They cooked up quickly and came out looking nice and golden, just like the takeaway ones the kids noted. I thought that being mini they might not have much "substance" to them but they were quite meaty and solid. The batter was quite thick and added to the mini hotdogs being quite filling despite their size.

We had them with tomato sauce and they tasted really nice. Miss Eleven noted that they "taste just like the real ones". Loosely translated as tasting like the ones from the takeaway shop! However being mini size though, there was no waste which I like. Kids being kids, it's not unusual to be throwing unfinished food out so it was nice to have something that was the right size for them and they like it also.

Calorie wise they aren't too bad at all but particularly as we cook them in the deep fryer, they would still be a sometimes food. I know there is no price noted yet and I haven't looked in the supermarket but I would buy them in the future, while I'm sure they are a little more expensive than the fish and chip shop, they were a lot nicer, much more satisfying, nicely sized and a great alternative. Love them! 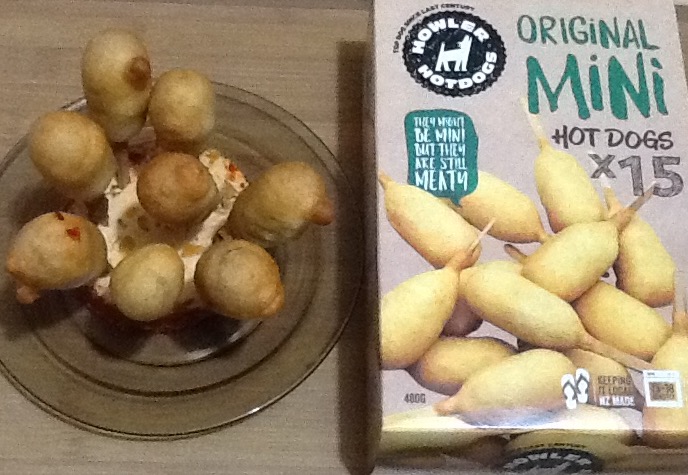 There were nine of us for dinner that night so we decided to have the pack of mini hotdogs as an entree. My friends, who are in their thirties, have four children (Miss Seven, four-year-old twins, and Miss 18 months) as well as two boarders, both from overseas and studying at the local university. Mr Japan is in his first year and Miss Singapore in her second. This meant we had a real cross-section of people of various ages and food preferences so it seemed a perfect opportunity for the trial.

Miss Seven and Miss Singapore thought it would be nice to make the entree look special so they unwrapped a chilli and mango cheese ring which had been in the fridge, and stood the heated hot dogs in it. The soft cheese meant that they stood on end and looked somewhat like a flower - or at least that is what Miss Seven said. We then added tomato sauce in a separate bowl for the children.

The young ones loved the mini hotdogs. Miss 18 months took a long time to eat hers but she would not accept any help, and eventually she finished it. All four of the children loved dipping their sausages in the sauce and then trying to catch the drips on their tongues. Miss Seven ate two without any difficulty and would have had a third if she had been allowed.

I tried one without any sauce and found the flavour quite subtle, but that is all good as they are really designed for children rather than for adults. Mr Japan wanted some sauce with his so our host got out the chilli sauce and put that in another bowl where the children could not reach it - they will try most things, but this particular sauce is hotter than most. The children's mother, meanwhile, had poured juice for everyone to accompany our entree.

I did not think this product was like a conventional hotdog at all. It had a solid, meaty texture and was very filling so would go much further than other precooked sausages. The thick batter which surrounded it made it appear more like a soft pastry than a conventional batter and this made it even more satisfying. It would make an ideal meal for children when adults are planning a more sophisticated dish, and certainly all four of them appeared to be very happy with their share.