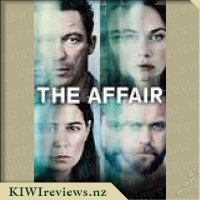 Disclosure StatementFULL DISCLOSURE: A number of units of this product have, at some time, been supplied to KIWIreviews by the company for the purposes of unbiased, independent reviews. No fee was accepted by KIWIreviews or the reviewers themselves - these are genuine, unpaid consumer reviews.
Available:
Oct 2014

The Affair (season one) product reviews

"The Affair" explores the emotional/psychological effects of two affairs.

Young diner waitress Alison and her husband, rancher Cole, are struggling - personally and financially - in the wake of tragedy. Noah, a settled teacher and would-be novelist, is summering at his in-laws' Hamptons estate with his wife, Helen, and four kids.

When Noah meets Alison, they begin an affair. For her, he's a welcome escape; for him, she's a pretty distraction. But, the tryst eventually ends two marriages - one that was already a bit shaky, the other that was on solid ground.

I am fascinated by this series. Not because of the plot but because of the way it is told. The show goes for an hour and it is broken up into two stories, during this season one - it was told by Noah and Alison each telling a fragment of their life told purely by there own memories and how they recalled the events happening (season two and three are told by there ex husband and wife at times). Now what is absolutely amazing is both sides tell completely different stories - which goes to prove there are three sides to every story: your side, there side and somewhere in between there is the truth. Not only do certain conversations differ but what clothes they are wearing on that particular day or how they where wearing there hair changes and then depending on who is telling the story reveals a lot as well as when ever it was Noah's version he is always a saint where as Alison's version he is a slime ball.

If you are after a fast story this is not the show for you it is extremely slow but it is mesmerizing to watch. There is the affair element and there is sex and a lot of bad language but its real and its gritty and there are times you are watching Alison ride a bike for three minutes nothing else is happening besides watching the scenery go past but you start to feel for them and your heart bleeds for the partners and it makes you question why people do it considering the risk they are taking and the hearts they are breaking.

I stumbled across this show on SoHo and saw the second series first, then I watched four episodes of the third series before we cancelled our subscription but it has always stuck with me. They had a pop up station of the whole three series so naturally I taped it so I could get the answers that I required. Every spare chance I have had I put it on just to watch it all unfold and I can not get enough of it. I absolutely love the realization that in life we are all the same when retelling stories we want to come off as the good guy and you alter the story to make it work. There are occasions where I did get confused as the story differ so greatly and a key point is missed off one of the versions but inserted somewhere else which shows how blurry life and memories can be.

This is truly worth watching if you like mind trips. My husband refuses to watch but that is more to do with the premise of cheating but I have shown him a couple of scenes to prove how amazing it is that versions differ and he just kept saying 'that's not the same scene until he sees that it is even though they are completely different'. I am surprised that more shows are not told like this.

Although I do find it slow in areas and Helen facials are totally annoying, but the rest of the casting is incredible and I am in love with the show and can not wait to find out what happens in season three. If you get the chance watch it as it is way more then just an affair it is life altering.

When Ted's best friend Marshall (Jason Segel) and Lily (Alyson Hannigan) decide to tie the knot, it sparks the search for his own Miss Right. Helping him in his quest is his bar-hopping "wing-man" Barney (Neil Patrick Harris), a confirmed bachelor with plenty of wild schemes for picking up women. Ted's ... more...