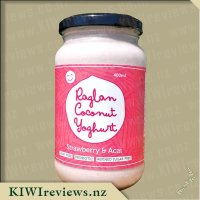 This product comes in a 400ml jar which is packed with coconut goodness. It is dairy-free and suitable for vegans so everyone can now enjoy the versatility of a quality yoghurt.

There are no artificial ingredients: the sweetness comes from the natural fruit sugars in the apple, strawberries, elderberries and acai berries which combine to produce a unique flavour sensation.

This was the second flavour of this particular brand that I tried and having really enjoyed the first one, I was looking forward to this. Like the other, the yoghurt is nice and thick and creamy which I really like and has a rather divine smell that got my tastebuds going!

I initially had some by itself as a snack, being free of refined sugars made it completely guilt free but still gave me enough natural sweetness that it satisfied that particular craving. The next day I had this with my muesli as something a little more filling and it was fantastic! Finally, I used the rest to make ambrosia as I had with the vanilla bean and this was a massive hit with the kids. Sure there were marshmallows in there but otherwise, they couldn't tell that they were eating something a lot healthier than their normal sugar laden preferences.

The only downside for me is the price, as much as I love this product, the price does make it unaffordable for this to be something I purchase regularly and as I don't have issues with dairy, it's not essential. I would still highly recommend it though to anyone wanting a dairy-free, vegan alternative.

My girls had devoured the Strawberry Little Yoghi from Raglan Coconut Yoghurt so were keen to have more especially when they discovered we had a jar of it in the fridge. That isn't entirely true as the jar is actually strawberry and acai. I keep telling Miss 7 and Miss 9 they should be reading more but they don't listen to me. To them it was the same product just in different packaging. As I didn't taste the Little Yoghi I can't comment of the taste difference.

We noticed that the yoghurt had separated a bit with a layer of pretty pink on the bottom so we gave it a good stir before dishing it up. The jar is 400mls so I divided it between the three of us for an after school snack. It wasn't until I read the label that I realised the jar was supposed to be 8 servings of 50g each. We were happy with our larger serving and it is closer (although still less) than they would get in a pottle of regular yoghurt. In fact they were both disappointed to find there was not an opportunity for another serving.

All three of us loved the taste of the yoghurt and the girls didn't realise that it was made from coconut which they both tell me they don't like. This of course is very important for vegans and those with dairy allergies as they wouldn't normally get to enjoy yoghurt. It was a nice smooth texture which appeals to many young children who don't like the fruity chunks I was pleased to find that although it didn't contain any refined sugar the fruit juices provided ample sweetness. This is yet another Raglan Coconut Yoghurt product that we love and will be recommending to others.

I was really looking forward to trying out this Strawberry and Acai Coconut Yoghurt, as when it comes to yoghurt strawberry is a favourite of both Miss 4 and myself. Having tried several of the brands other flavoured yoghurts in the past I knew that I was sure to love this flavour also and I was right!

Opening up the yoghurt I was pleased to see that it was a lovely thick and creamy consistency which is one of the things which I love about the Raglan Coconut Yoghurts, I had wondered if there would be any 'bits' in the yoghurt but quickly found that this is a smooth yoghurt, it did however get me thinking it would be quite nice if the company produced some yoghurts with fruit pieces in them for something a little bit different, although in saying that this is something you could easily do yourself!

Both the smell and the taste of the yoghurt were divine, I loved the texture of the yoghurt smooth, thick and creamy from the start of the jar right to the very last spoonful, and the taste, a lovely fruity strawberry flavour which tasted just like the real thing but with the lovely addition of coconut, the flavour of the acai was most probably there also but to be honest this is something I have heard a lot about but have never tasted myself. I couldn't wait to try this out and had several plans for it which all happened to work out perfectly.

One of the things I did with this yoghurt was use it to make a cheesecake, as I didn't want to use the whole jar to do so I used half of it combined with 1/2 a tub of greek yoghurt, which I beat together with some sugar and cream until thick. I popped the filling onto a crushed biscuit base and then topped it with a homemade strawberry sauce and left it in the fridge for several hours to set and then garnished with some grated white chocolate. I served this up after dinner for dessert for my family and friends and it was an absolute hit, everybody raved about it and the most talked about thing was the creamy coconut taste which everybody seemed to like, it was really good.

With the remaining yoghurt I made some fruit smoothies for my family to enjoy as part of a special weekend breakfast, the yoghurt combined with frozen berries, milk and banana was amazing and even my partner who doesn't like coconut enjoyed it and said it was nice and creamy. The rest of the yoghurt was used as a side to some apple crumble and it made a really nice change to cream or ice cream and was somewhat more refreshing, Miss 4 ate the yoghurt and left the pudding and was unimpressed to hear that the yoghurt had all been eaten up and that there was no more for her to enjoy.

This yoghurt is simply delicious and has a great strawberry taste to it, I would totally recommend trying it especially if you are allergic to dairy and need a yoghurt alternative, this is probably just the thing you need, I know i'll be buying more of it. 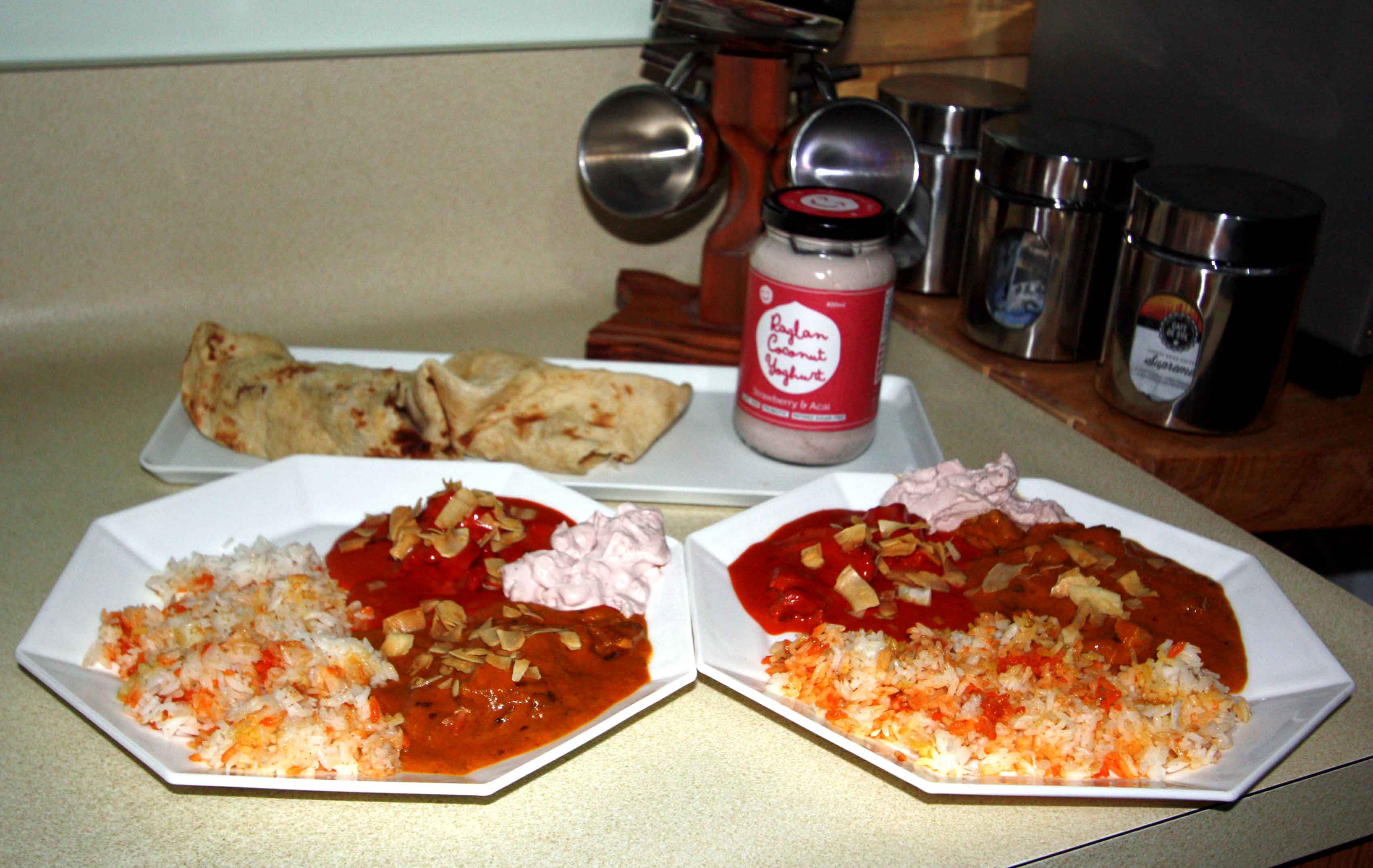 Three of us shared this jar of yoghurt. I had hoped the other two would not like it so I could have it all to myself, but no such luck: they were both enthusiastic and keen to finish up their share! Their initial reaction, when they saw how thick it was at the top, was to ask if it was ok - but they quickly realised that the thick texture extended right to the bottom of the container, and that this was a characteristic of coconut yoghurt. Once we had dealt with their initial surprise, they both tasted it. They did both comment on the price, but accepted that this is a specialist yoghurt made with ingredients that might be more difficult to source than milk.

I have had this brand of yoghurt many times before, just not this particular flavour, but for both of them it was their first time. She was captivated immediately by the flavour - she said the strawberry flavour was quite strong, so strong in fact that she could not taste the coconut or the acai at all. There again, she admitted that she did not actually know what acai berries taste like!

He took longer to finish the spoonful I had given him to taste, but once he had thought about it, he said he could taste strawberry and "something else which was not quite as strong". He did like the natural sweetness, and was pleased to learn that this was the effect of the fruit rather than added sugars. Once they had both tasted a little, I shared the ingredients list with them and they were intrigued to learn that the jar contained elderberry juice as well as strawberry, coconut and acai berries.

Having tasted it and decided we all liked it, we divided the contents into two halves. Our dinner consisted of two curries (butter chicken and lamb korma), both of which are fairly sweet, mild curries which would go admirably with a sweet yoghurt. We served the dish with plain naan bread and a sprinkling of pineapple flavoured coconut chips. The meal was out of this world, with the yoghurt adding a subtle edge to the flavour.

For dessert, we had some apple and blueberry muffins. They were a day old, but we wrapped them in foil and warmed them so that they were refreshed, and then served them with a dollop of the yoghurt on top. We were already quite full from the curry, so two of us could not quite finish the muffins as well - but I noticed that, although there were still some pieces of muffin left, there was not a speck of yoghurt left behind. It was too good to leave.

We all love a good toasted sandwich. But sometimes we can't be bothered making them. Now Watties has solved that problem with their new range of pre-prepared Toasties. These are a true heat and eat snack. Simply take one out of the freezer, drop it in the toaster and you're away laughing. Toasties come in a range of flavours including Baked Beans; Ham, Cheese & Onion; Cheese & Onion; Corn & Cheese; and Cheese Lovers.