« Ghost in the Shell review 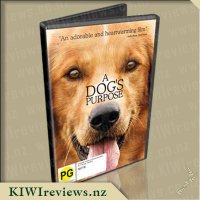 Based on the beloved bestselling novel by W Bruce Cameron, A Dog's Purpose, from director Lasse Hallstrom (Dear John, The Hundred-Foot Journey) shares the soulful and surprising story of one devoted dog (Voiced by Josh Gad: Frozen, Beauty and the Beast) who finds the meaning of his own existence through the lives of the humans he teaches to laugh and love.

So a Cat's purpose in life is to be treated like royalty, to be waited on hand and foot, to come and to go as they please and listen only when and if they want to - basically that is how it is in our house - we are primarily the pets and they are both the owners. Where as a Dog's Purpose is to be there for their owner, to love and obey and to most importantly listen. This movie shows you five different lives of a dog told thru the voice of Olaf from Frozen, the harsh reality that not everyone showers it with love and at times it can be hard being a dog. But though there is a couple of hard times there is the beauty of watching a kid grow up with his beloved dog until the very end and then a lonely student finds more than just love with the aid of her dog and then ultimately he finds that boy again who is now a man.

It gives you the cute fuzzy feels, it has you laughing out loud and it makes you cry more than once. It is definitely sad and reminded me of the fur babies I have lost along the way. Although it does not entirely hold your attention throughout the movie and slows down in places it is still watchable. My youngest lost interest about half way through and although she was still 'watching it' she was also playing. My eldest like me was in tears and we both tried to hide it from each other.

In different areas, you could tell where the dog had been trained to do special tricks and I don't think it was filmed very well in some places and it fell short, but to kids it's magical. However, in saying that it did have them asking me lots of questions, which I was not prepared for. Like when Ethan's dad was attacking the mother and they could not understand why, so I did have to pause and discuss drinking and why it can be very bad for different people. Then there was a scene later on when a girl had been kidnapped and they asked me was it because the guy was drunk and then I had to discuss that not all people in this world are very nice. They then could not understand why the man drove the dog to another town and left it there so again it involved another discussion. Basically not the sort of movie you want to view if your kids live a sheltered life.

I had seen a video of the making of this where the dog had been thrown into the rapid water and it just about drowned and there was an outcry over the cruelty to animals and that it should be banned. When I received it I was telling my husband about it and I had not realised that little ears were listening. Once it had finished Miss 8 turned and said that the dog did not drown in the river, which then resulted in another conversation about how movies are made and what we actually end up seeing is nothing like the way it is shot. I myself was very very wary about watching it because of this reason but in the end, I am glad we got to see it. We watched the deleted scenes and the outtakes which helped them understand that not everything you see should be believed and reality is very different from the movies.

It is a sweet, at times sad movie. I think the girls got a lot out of it and really it does make you want to go out and get a dog.

In this fresh, unfiltered modern comedy, best friends and academic overachievers Amy (Kaitlyn Dever) and Molly (Beanie Feldstein) realise they've missed out on pretty much all fun during high school. So, on the eve of graduation, they decided to make up for the lost time with one wild adventure in this hilarious coming-of-age story about the meaningful bonds we create, also starring Lisa Kudrow, Will Forte, and Jason Sudekis.