« Come and Find Me review

Ghost in the Shell review 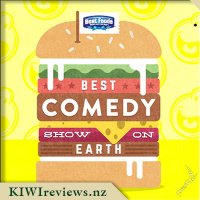 The Best Comedy Show on Earth with Best Foods Mayo was a massive success at this year's Comedy Festival, so we've got together again to take the show on tour! People from all over the country can now get their own taste of comedians that audiences were raving about. Travelling to 13 cities, they'll bring a smorgasbord of fast-paced comedy featuring 6 acts, 100's of jokes and 1000's of laughs - all for under $40!

Like the Tour de France this tour happens in stages: Top Half of the North Island, the Lower North Island and the South Island leg. Mark your local date in the diary because the Best Comedy Show on Earth Tour with Best Foods Mayo will offer a myriad of delicious comedy flavours to suit everyone - making it a great night out for a date, mates, social groups or families that love a good time. 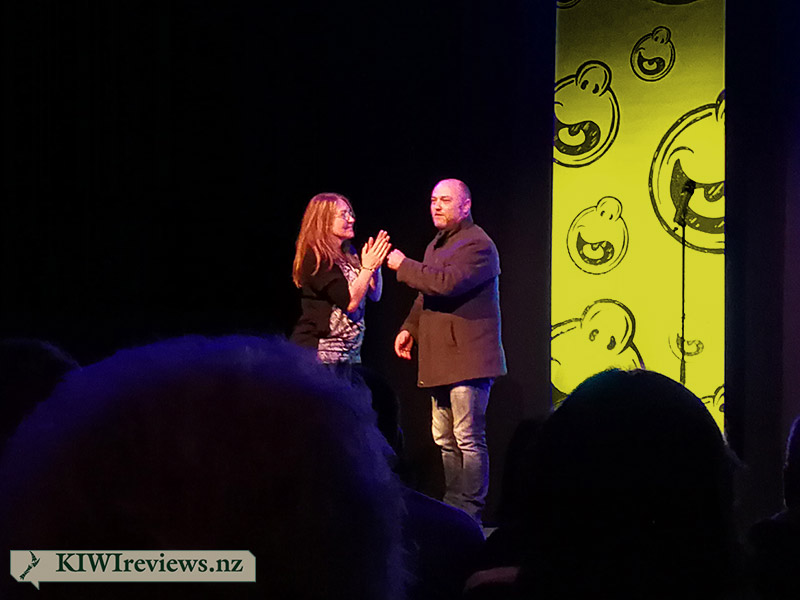 A comedy gala is always going to be a hit'n'miss affair - the wider the variety of styles on display, the more likely you'll please the entire audience... and the more likely that the audience won't be pleased all the time. That's the subjective nature of comedy. So, if someone tells you that you'll never stop laughing, they either have a very broad sense of humour, or the show is narrow in style. This show had a wide variety of performances, so naturally, while there was someone always laughing, not everyone laughed all the time.

Naturally, every comedy show has hecklers, and while some of them were awesome, there was one couple in the front row that MC Brendhan Lovegrove just could not seem to leave alone. So, naturally, one of the hecklers just kept going on at him to the point he was more often than not trying to tell her to shut up after a minute or two. Such gems as "Ma'am, this isn't a conversation, it's a gig. Shush!" or "Hey, I didn't see YOUR face on the poster out front, time to stop now OK?" Which, while funny to start with, got quite annoying by half way through. If you didn't want her to talk mate, you shouldn't have kept asking her questions.

Another heckler was off to one side and just kept shouting out some great answers, one-liners and prompts. She was clearly drunk but managed to keep herself within the limits, to the point that at the end of the show Lovegrove awarded her the Sponsor's Hamper because, as he put it "...she was awesome and crazy but kept it under control..." then invited her up on stage when she tried to get a hug from him. She helped keep the seed of randomness growing, making the show evolve outside of the script in a few places. Because of her, the MC moments gave rise to a lot of entertaining improvisation.

The first act on stage was Melanie Bracewell - and she was quite a hoot in places. Risque, but able to wrap a lot of it in appropriate metaphor, she was entertaining on a number of levels. Considering there was a 14-year-old boy in the audience, she did very well to adjust her routine to stay *just* on the right side of explicit. Not an easy feat, so the execution of it was laudable.

The second act - Brendan Green - was, for me, a waste of time. Comedy being a very subjective and fickle thing, having a routine based exclusively on "awkward relationship moments" landed cold at my feet. From the amount of laughter, others clearly found him far more entertaining than I did, and good on them. So, because of that... that's all I'll say on his act.

The third act, and the final one before the intermission, was "Frickin' Dangerous Bro" - a three-man comedy skit act which, while funny in a semi-cringeworthy way, ultimately failed to entertain many in the audience, as evidenced by the fact that after a particularly predictable punchline, one of the team had to come back on stage to say "That was the punchline folks... that's where you laugh." Sorry guys, but a joke that has to be explained, isn't that funny. Time for you to explore some new material.

After the break, MC Lovegrove returned to warm the audience back up, and what a sterling job he did of it too, with his "What the French would sound like if they had a different accent." routine. "Go on! Name an accent, I'll say something in French in it." he boasted... then promptly ignored an overwhelming audience request for him to do an Indian and/or South African accent, instead opting for Maori (which was, to be fair, pretty hilarious), Scottish, Northern AND Southern Irish, German (WW2 era Nazi though), and a few others which I missed because I was laughing so hard my ears blocked up. If he could manage to string that one skit out for half an hour, I think we all would have gone home with tears streaming down our faces and more than a few people dashing for the loos before they wet themselves.

After that, we were greeted by fem duo "Fan Brigade" who "treated" us to a song about how guys should not take love-making lessons from porn movies, and how a certain sexual act is not foreplay but reserved for birthdays. A refrain they urged the audience to sing along with. Naturally, the two drunk hecklers were keen to join in and expand upon, while the rest of the audience proved somewhat more reluctant to be dragged into. Some good, if somewhat nervous, laughs were garnered by this duo, but not overly well received. They came across like French & Saunders, with Rebel Wilson standing in for Dawn French.

The final act, Eli Matthewson, was a great choice for rounding off the night. Self-effacing, a little shy, that "gay guy next door" vibe and some hilarious anecdotes had the audience relaxed and laughing gently to close off the show. While there were a few moments that got a little into the red-light zone, he kept it seemly and didn't even realise that the biggest laughs he got were from anecdotally using the name of the 14-year-old audience member for a fictitious character he was having a conversation with. The best comedian turned out to be the one who wasn't even trying to be as funny as he was.

A short burst from MC Lovegrove to close off the show, during which he gave away the hamper, many rounds of applause for the performers, and we were all shown the door. My only real niggle came from seeing almost everyone walking out with a free jar of Best mayo in their hands... except me. No idea where the heck those mayo-handlers were hiding, because I looked for them, I swear I did... but they had their ninja game going on and masterfully blended into the background any time I looked in their direction. It has been a couple of years since I have been to a live comedy show, so to have a show with six different acts sounded like a great opportunity. The Bruce Mason Theatre was a good venue choice with plenty of nearby parking, a great view from all seats, and a very clear audio system. With a nice selection of drinks and snacks, the night was off to a great start.

Brendhan Lovegrove was the only comedian that I had heard of from the lineup, so I was pleased to see he was the MC for the event, who after a little warm-up set, would introduce each comedian, and jam in a few jokes in-between acts. Lovegrove was certainly what I would consider the highlight of the night for me, due to our similar views on humour, and his ability to bounce off of and add to the other comedians' topics, and being able to put a positive spin on otherwise self-deprecating anecdotes.

Each act brought a different style of comedy, so while everyone is practically guaranteed to enjoy something, it also ran the risk of there being several acts that one doesn't like. When transitioning from simple stand-up to a musical duo, to a sketch trio, the difference in styles and performance can come across as a little jarring and out-of-place, but Lovegrove did well to bridge the gaps between the acts and keep the laughs flowing. The star of the night wasn't actually a comedian, but a ten-year-old child that was seated in the second row. Hilarity is guaranteed when you watch each and every comedian describing dysfunctional carnal acts and hesitating when they lock eyes with a ten-year-old boy from a Kohimarama school. That boy certainly learned a lot of things (and perhaps a few vulgar words) last night.

There is little else that I can say without spoiling the show, beyond it being very much NSFW (not safe for work) in content. Each act had their repertoire revolving around content of a sexual manner, so if you love your edgy comedy, this is definitely a show to watch. Topics that you may learn about; relationships and dating, sexual orientation, Aaron Smith, sexual acts, racial discrimination, and the merry idea of the french language spoken with different accents. There is no shortage of d***s, v*****s, a***, as well as the colourful language. To paraphrase the words of Brendhan Lovegrove spoken to a ten-year-old, "F*** d*** s*** c***"

Upon exiting the theatre, the sponsors were nice enough to provide the patrons with a parting gift. There is a reason why I posted the photo that I did. Cheers Best Foods!

Tim Brooke Taylor, Graeme Garden and Bill Oddie, were an instant success with their mixture of outrageous humour and visual effects.

The characters were instantly recognisable stereotypes: Tim, the champion of everything British, Bill the bearded hippie in his rebel combat jacket and ... more...