Come and Find Me review 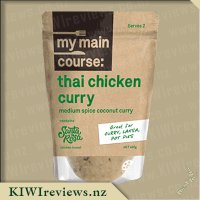 Using lean chicken breast, we've created a mild but flavoursome Thai curry perfect for the whole family. Using delicious spices, coconut cream and kaffir limes, this My Main Course meal starter is so fragrant you'll find it hard to get it to the table before trying it. 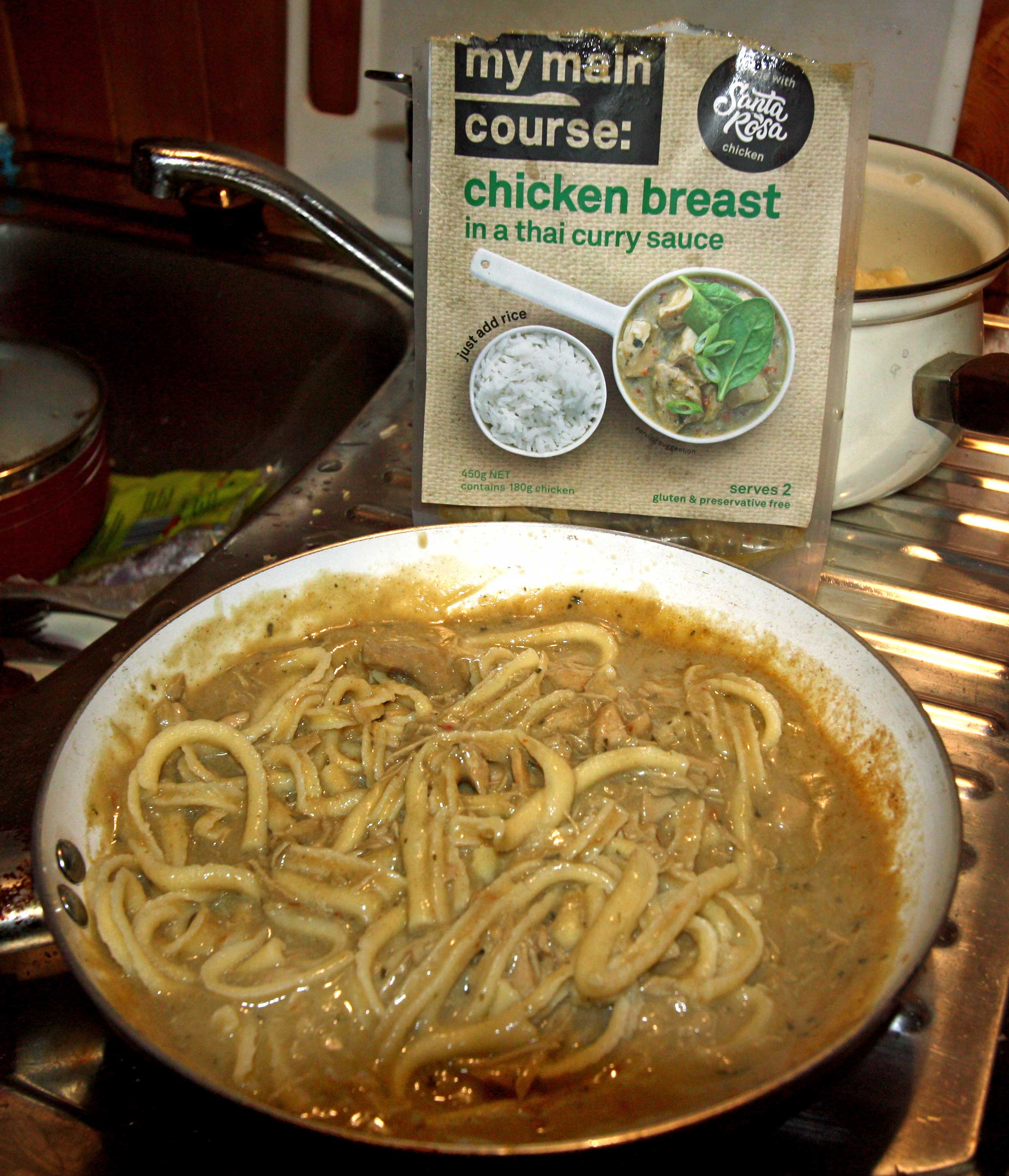 I have enjoyed Asian cuisine ever since I worked part-time in an Auckland Chinese restaurant as a permanently broke and permanently hungry student. Once the restaurant closed for the evening, the staff were treated to real Asian cuisine - not the watered-down version that most of the customers expected - and it was not just Chinese but a wealth of other cooking styles and tastes. The chef was not just any old cook; he was an artist who inspired me to take risks with my own cooking and always be open to new spice combinations and possibilities.

The New Zealand scene is far more accepting of new tastes now. New immigrants have brought exciting new recipe ideas to our kitchens; people are much more receptive to a variety of meal ideas. But sometimes a less radical combination of ingredients is called for, especially where children are concerned, as they can be critical of unfamiliar ingredients.

This is where this product is a winner. Rather than presenting itself as a Thai dish per se, the packet info advertises the contents as "chicken breast in a thai curry sauce" which led me to believe that the chicken was the main ingredient. In the fine print, chicken is listed as comprising 40% of the pack contents, and I would agree with that. I was very satisfied with the meat to other ingredients ratio; you could actually see the chunks of meat, unlike in other similar products I have tried. The sauce is very pleasant, certainly with a Thai flavour and even a very slight kick from the small amount of chilli, but mild enough to suit my two companions who are both fussy eaters and somewhat reluctant to try a new dish.

One of my dinner guests was an elderly woman (my aunt) who has never been adventurous with her eating. She is a strict meat-and-two-veg person from way back. Her grandson (aged nine) had come with her to visit and was also unused to more creative meals. He lives with her so basically has similar tastes in food. These two were going to be a challenge, so I was keen to see their reactions.

I had no rice to hand but we had some home-made egg noodles which I thought would be an acceptable alternative for my two challenges. I was going to serve the two items side by side on the plate but the curry was actually quite runny so in the end I put the noodles into bowls and topped it with the chicken mixture. I had a sneaky taste myself when I was preparing the meal, and personally I thought it was delicious - not too spicy, but with that lovely aftertaste of lemongrass that leaves you wanting more.

Mr Nine tried a mouthful, chewed it thoughtfully, then decided he liked it. I asked him what he liked best about it. He informed me that he loves chicken, and then proceeded to eat his entire bowl full. I could not get another word out of him as he was too busy eating, but I guess when you are nine years old that is approval enough.

My aunt was a little suspicious until I told her it was just like spaghetti with chicken and some spices instead of mince and tomato. She was watching her grandson tucking in but then, realising that he was enjoying it, she decided to try hers too. There was a moment of silence while she started eating. Then she nodded and, like her grandson, she cleared her plate. Then she commented: "I think this would be really nice in a pie!" The hardest part about preparing this meal was waiting for the rice to cook in the rice cooker besides that it was so easy - just what I love in a meal! Simply put you put the curry into a microwave safe bowl and put lid on and cook for two minutes, stir it then cook for a further one minute that is it. Where as with the rice you need to measure it, clean it, then add the water and wait for what seemed like ages for it to cook. Then its just the issue of dishing up the rice up and covering in the sauce for my youngest and putting it to the side for my eldest and roughly in less than ten minutes you have a lovely dish waiting for you.

My husband had plans today so its just myself and the girls and when it came time for lunch this seemed like the most easiest of solutions. The packet does say it is enough for two people but honestly it can feed three without any worries. We all love our Thai meals and the three of us do not like spice in our dishes so I had a can of coconut cream on the standby but thankfully it was not required.

Initially it did have a small kick but as the meal progressed you adjust to the flavour and it is not an issue for very long. Both girls commented about how yummy it was and both said they would happily have again, which is a winning combination. I myself enjoyed it and it was just the right amount for me when it comes to lunch. For a lazy Sunday afternoon this is an ideal packet to have sitting in the fridge. It tastes good, ticks all of the requirements and is extremely eatable, will have again when in the same situation. Many years ago, I used to work night-shift in an office that was less than 20m from a Thai restaurant. At about the time I was knocking off for "lunch" the restaurant was closing down and getting ready to toss out the night's left-overs. After about 6 months, the owner and I had become friends, as I would help them to redesign their menus every time seasonal ingredients forced a menu change, and they started offering me, and the other night crew I worked with, the occasional meal rather than throwing it all in a skip bin to go to the pig farms.

I rapidly developed a love for Thai food, though I always found most of the sauces to be a little too thin and watery for my tastes. The flavours more than made up for it though, and the rice was great at catching the sauce so I didn't lose any of those amazing flavours. Time moved on, and so did the restaurant, but my love of authentic Thai cuisine stayed with me all through the years. So, when I had the chance to review this, I was expecting it to be a typically Westernised 'nod' to the real thing.

How glad I was to discover the error of my assumptions. While not a true authentic dish - it was far too mild and lacking fire for that - it had within it all the key factors that make Thai food so delightful; flavour, depth, variation, richness and versatility. Finding my pantry sans noodles, I opted to make a quick risotto from scratch - I can't stand boxed versions now that I have mastered making my own. It took me less than 10 minutes to make up enough rice to serve 3 people, which was divided between a bowl and two airtight containers for the fridge. The Thai sauce took less than 5 minutes to heat up in a pot, though I think it would have taken only 2 minutes at 70% power in a microwave, and that was then placed atop the three portions of rice.

Two for the fridge, one for the now-ravenous belly. I loved the flavours, but I especially loved the fact that I could SEE the chicken. While the carnivore in me railed at there not being enough - there's never enough for me - there was plenty to satisfy the average diner. The flecks of chilli, and the hints of coconut made this really pleasant to eat without being too hot for the average Kiwi palate. I cheated and gave it a very generous grind of my home-made chilli & black pepper mix, and that made it almost perfect for me.

Overall, this was a simple, tasty and very pleasant meal, times three, with a total cost per portion of about $3.50 - $3.70 depending on what you add to the risotto. You could easily serve this over rice noodles for a more authentic meal, or over pasta noodles at a pinch. My only slight niggle was that while I am certain there was some lemongrass oil in the mix somewhere - or a very good approximation of it - I would have like that to have been a little more dominant to bring it more in line with the traditional flavour profile of Thai food.

ViBERi organic freeze dried blackcurrants are full of vitality and vitamins to provide you with good health. Let the intense flavours burst in your mouth or add them to your cereals, smoothies or salads. Also great for baking or garnish to give added flavour and colour. No preservatives or additives, just the pure goodness of 100% organic blackcurrants.