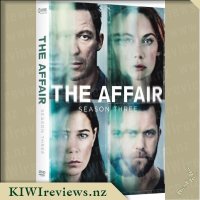 We see who we want.

Season 3 of The Affair picks up three years after Noah's shocking admission of guilt at the murder trial of Scott Lockhart. Noah attempts to restart his life, but the damage wrought by his past decisions has made him a ghost of his former self. Alison has been raising daughter Joanie alongside Cole and Luisa in Montauk, but Alison's past continues to rear its ugly head as Cole and Luisa attempt to build their own future. For Helen, life appears to continue on, but just below the surface of a successful business and a bustling home lies uncertainty with her boyfriend Vik, instability among her children, and an unshakable feeling of guilt.

I was not sure what to expect from this series. The title put me off initially: I thought it was going to be a chick flick, and was intrigued as to what it would be about. However, once I was into the story, I realised that this was one description that absolutely did not apply. High drama it is, with a few interesting twists in the plot development, but "chick flick" is the last genre I would associate it with. A pity, then, that it does not have a more intriguing title. Had it not been for a friend's recommendation, I would probably have passed it by.

So - I settled to watch it, becoming more engrossed as the episodes went on. I had not seen Series 1 or 2 (having avoided them because of the series title) and might have had problems picking up the back story, but the combination of an excellent recap sequence at the start of the first episode and a quick visit to Wikipedia to fill in the gaps meant that I was fully prepared to enjoy it. I also chose to watch it in the company of two friends, both of whom had seen Series 1 and 2, and were keen to watch Series 3 with me - so this meant I could ask questions of either of them if I needed to. However, I found I was able to pick up on the story without much hassle.

I like the idea of the way the story often diverges, presenting an event from the perspective of one character and then the same event from the point of view of a different character. The way that everyone sees things differently is explored at length, and is an innovative way to offer different angles on things. This was a recurring technique throughout the ten episodes, and once I had got used to it, I found I quite liked this way of making the audience think. Even small details like hairstyles and clothing tended to change when the second perspective was shown, illustrating the way that everyone notices different details.

I also liked the use of flashback and flashforward to show what a character was thinking, and why. These jumps in time were useful in filling in the gaps and providing a context for some of the actions that might otherwise have appeared unmotivated. They also suggested what was likely to happen next so that when it did happen it slotted into the story naturally. The story does rely heavily on psychological character studies, shown mainly though flashbacks (as motivation for a later event), but premonitions are equally important!

On the surface, the series is about four characters and the way that they are drawn towards people other than their own husbands or wives. But the story is much more complicated than that. The theme of the series appeared to me to be the way that blame (whether personal or of other people) is assigned, and how nobody is ever truly innocent or guilty: everything is seen on a spectrum, with the place on that spectrum defined by the person describing it. Atonement and restoration are also major elements of this blame, with self-harm and negative self-image being just two of the aspects that are prominent in the story.

We all enjoyed the series although my friends did not like the soundtrack at the start of each episode (Fiona Apple's Container). The lyrics lacked relevance to the story; possibly there were some links hinted at, but neither of them could see them. There was also an ambiguity about the style of the music which they found jarring. I did not mind the music although it is not my personal choice; possibly the lyrics might be hinting at things to come, a sort of death-and-regeneration scenario, but if that is the case it was quite obscure.

It is to be hoped that the same actors will be cast in the next series. I found the standard of the four main actors (Dominic West as Noah Solloway; Ruth Wilson as Alison Bailey; Maura Tierney as Helen Solloway; and Joshua Jackson as Cole Lockhart) to be first class, especially Wilson and West who are both British but do a convincing American accent).

We did all enjoy the series, and I understand that there is a final one (Series 4) in the pipeline, so it will be interesting to see what that has in store for the viewer - given that Series 3 ended with the inevitable cliffhanger! But to say more would constitute a spoiler so it will leave it at that.

Everyone's favourite postie is back with a brand new series and an even more challenging set of deliveries. When a naughty sheep escapes and is causing havoc, can Pat catch him and get him safely back to Amy? A swarm of bees has buzzed out of their hive and is on the hunt for pollen, there are flowers ALL over Greendale! Pat needs to find a way to tempt the bees back into their hive as quickly as possible. Whatever it is Pat is always there to get the job done.