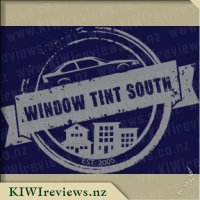 We have been operating in Invercargill and Southland since August 2005. We Started as ARC Films in a small 6 x 7m shed out the back of our house in Glengarry.and change our name to Window Tint South in late 2006.
2007 saw us move to a larger premise to help expand the business.
2011 We moved house and built the workshop we now operate from.

We can tint almost anything that has glass.

We also have frosted obscured film available for bathrooms or office windows. It provides full privacy both way and still lets through full light. Recently my teenage son got his drivers licence which meant he was also going to be buying his first 'real' car. With limited income he had previously purchased a couple cars (before he got his licence) with the intention of doing them up and selling on to buy a better car. So 3 cars later lol he bought a road legal and tidy vehicle but being a teenager he was not quite happy with how it looked or sounded. So a couple more weeks of saving every cent and he had made up his mind that he was going to tint the cars windows and put on a slightly louder exhaust

We searched window tinting in Invercargill, and were very limited with options but Window Tint South was running a promo and if you said you saw them on facebook you would get a discount off the full cost of the job they did. A quick phone call and the car was all booked in, and a basic quote given ($400 for side and back windows of a sedan). The waiting time from phone call to first available day was only 1 week which we found to be very quick, and it would only take one afternoon to complete the work.

On the afternoon the car was booked in for my son had worked, so we phoned the guys back and asked if we could bring the vehicle in early and then collect it the following morning instead of that night. This was fine. We took the car down, and paid for the work (ATM) and left. Half way home we remembered the facebook promo so went back to see if they would still do it even though we had paid already. They honored the promo discount, but as we had paid via ATM and they had no cash on them said they would leave the money in the car for when it was collected next morning.

The business is run from home with the workshop at the back of the family home so even though the car was unable to be locked up out of site we still knew it would be safe where it was kept. When we returned the next day to collect, a little late to be honest, the car was all completed with awesome tint work. The money and care instructions were in the glove compartment as promised, the keys in the wheel (as texted to us) lol as they were not home. They did a fantastic job. Top quality work in a very quick and timely fashion.

We have a second vehicle needing tinting and will be returning to them for sure and definitely have no problems with recommending them to others. They do not just do vehicle tints either, but also business and home window tinting too. They use top quality products, make sure everything is within legal requirements, are fast, friendly, very good price list, and very easy to deal with. Fantastic people definitely!

Take it indoors or out. Go fast or go slow. With the i2, all of your local transportation needs are met in one modern, balanced, intelligent machine.

Completely versatile and consistently enjoyable, the i2 is ideal in more ways than one. Not only does it take you out of rush-hour traffic and away from congested parking lots, it's battery operated, totally wireless, and intuitively moves where your body tells it ... more...