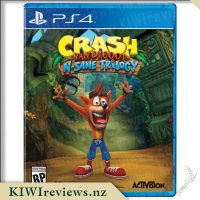 Your favourite marsupial, Crash Bandicoot, is back! Relive all your favourite Crash moments in their fully remastered HD graphical glory and get ready to put some UMPH in your WUMP!

Some 20 years ago, Sony released a playstation game called Crash Bandicoot. Way back in the day when playstation 1 and 2 were still the rage. Way back when I did not have children of my own, and as such, had the time to waste many countless hours trying to pass each different level. Some days ran into others, and weeks became a blur, but the thrill of clocking it worth it! Even my step dad was addicted. And once clocked, life carried on, until a new Crash game was released and you did it all over again.

Roll on 2017, I haven't played playstation in years, and now have kids of my own. We have moved from the original ps1 to the newer ps4 and the games are nothing like they were all those years again. But then the news hit - Crash Bandicoot was coming back. Remastered and available on PS4. The hype was real. Pre-orders of the game meant the game sold out within hours of hitting some stores. We had pre-ordered it!

The day it arrived, Ive never been so excited. I couldn't wait to get started. It was so super exciting. The same annoyingly catchy music, the same bandicoot, but things werent exactly the same. No...things were harder! Much harder than I ever recall it being. Levels that I used to be really good out, now took 3 or 4 lives to master. If I was one to rage while playing a game, it would have happened many times over. I'm not, but my 17 yo son is, and he got very frustrated with it.

Its still awesome! We have not clocked anything lol It is a struggle, and we play it every day. We have downloaded the hidden level that was removed from the original game too, and wow it is hard. But despite the struggles if you loved Crash Bandicoot then you still will. The graphics are awesome, yet still keep you back in the 90s when it first came out. It is nowhere near as amazing as graphics you will see in modern games now, but its all about nostalgia. If you werent a huge fan but still want to see what its about, perhaps wait till the price lowers a little. But remember you are paying for the first 3 games on one disc

Love it. Absolutely love it!

In 2001, Max Payne arrived to set the benchmark for action gaming, earning countless awards and revolutionizing the genre with cinematic combat sequences fuelled by the groundbreaking use of slow motion and compulsive narrative-driven gameplay. Now, working together with Rockstar Games' New York-based production team, Remedy has combined Max ... more...