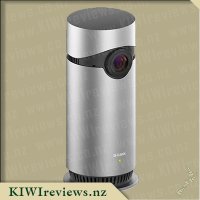 •  See your home in a whole new perspective with 180-degree wide angle view
•  Full HD 1080p resolution for sharp images
•  Record video clips with sound to microSD card to play back later (Supports microSDXC cards up to 128gb - card not included).
•  Receive alerts and record video clips whenever motion is detected
•  Enjoy crisp and clear two-way communication using the camera's built-in microphone and speaker
•  Night vision allows you to see up to 5m in the dark
•  Built-in microphone and speaker for two-way audio communication
•  Create HomeKit scenes seamlessly with other HomeKit enabled devices

Set up in seconds...
Follow a few simple steps in the Apple HomeApp to instantly see and hear everything that is happening in your home.

Always Home
Omna allows you to see and feel as if you are 'always home.' View everything remotely through your iOS device - keep an eye on your pet in the living room, or check your home is safe while away on holiday for extra peace of mind.*

Even when you're not at home, Omna's built in microphone and speaker allows you to enjoy clear two-way audio. Communicate with family members or your pets as if you are actually there.

*Controlling the Omna 180 Cam HD away from home requires an Apple TV (4th generation or later) with tvOS 10.1 or later or iPad with iOS 10.1 or later. Getting the negative out of the way first, because there's less of them - This unit IS Apple-only (which is only a negative to me personally since it meant I have to get an iPhone to be able to test it) and it's not compatible with the D-Link "mydlink" system so I wasn't able to integrate it into my existing setup - again, a negative relevant to my situation only. And there you have it. The rest is just pure goody-goody goodness.

Simplicity itself to set up, I downloaded the "Home" app from iTunes and also the unit-specific "Omna" app, then followed the 3-step pictures-only setup instructions. Take it out of the box, plug it in, scan the unique ID code in the manual with the app. Done. If I don't count the time to download and personalise the apps - because it's something you would have either done already, or would be doing for other hardware - then the setup took me less than 2 minutes from popping the box to seeing the live footage appear. I wish non-Apple hardware was that quick and easy.

The 'Home' app gives you the basics - it's more of an all-in-one co-ordinator, while the Omna app allowed me more fine control over the unit - setting motion-detection zones, personalisations, etc. The end result was a window in my phone that gave me a crystal clear view of the biggest two rooms in the building even in zero visible light. As you can see from the image linked to this review, the clarity in the dark is as stunning as it is in full daylight, especially impressive when taking into account that this camera has only TWO IR LEDs to illuminate it's field of view. Other cameras I have tested give lower results with FOUR!

You may notice the linked image has a strange yellow line on the "night vision" side - this is exactly 5m from the camera, and yet you can clearly see the far wall which is nearly 9m away - astounding range, though at that distance I found detail was greatly reduced and motion-detection was a bit patchy at best. The maximum range I would trust this unit to be 100% effective was still more than the specs stated - I found it quite acceptable at up to 6.5m - I could make out a face clearly at that range in the dark. In daylight, of course, the whole range of vision was crystalline in its clarity.

The 180 degree field of vision is great, allowing you to place the unit on one wall and see the entire room, rather than just a pizza-slice down the middle as with normal cameras. This is achieved by some very light-bendy optics in the lens and a hefty dose of image processing to twist the image into a format our brains will accept easily. So tempted to try and get lenses like these for my glasses!

That said, some of the computational warping can be a little off-putting when you look at the image, but that's more an artefact of our brain not quite accepting such a wide spread of image and processing it naturally. That's a MASSIVE firmware fault... in the squidgy processor between our ears. The camera does a brilliant job though. The unit itself is lightweight, requires only a microUSB plug to power it and will accept any 5 volt / 2 amp - which means I was able to make this unit totally portable - for a brief patch - by powering it with the GO Puck power pack. This opens up some intriguing possibilities with this unit if it was mounted on a sturdy RC platform. With the built-in microphone and speaker, it would be a great base for a cheap, small-format telepresence rig. It certainly gave my 9yr old son a spook when he came to visit me at the office and heard me telling him not to poke around in the gaming area. (The area on the far-side of that yellow line mentioned above.)

Overall, I quite liked this unit. It's got a simple style, some serious grunt under the hood, and has the potential to do a lot if part of a house-wide network of networked devices - a family which is sure to expand over time. My only wish would be to see this unit capable to integrating into the "mydlink" family of devices so that it would be useful to non-Apple owners too.

The portable B- Safe Emergency Power Pack is a 4 function emergency/safety device, providing a radio, a mobile phone charger, two LED torch power options, and an emergency alarm. The internal battery is recharged by a hand cranked dynamo, which means that it is always ready to go, and no batteries are required.