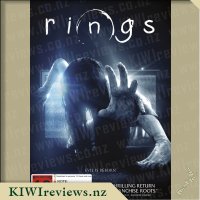 A young woman (Matilda Lutz) becomes worried about her boyfriend (Alex Roe) when he explores a dark subculture surrounding a mysterious videotape said to kill the watcher seven days after he has viewed it. She sacrifices herself to save her boyfriend and in doing so makes a horrifying discovery: there is a movie within the movie that no one has ever seen before.

"The Ring" is a very simple idea. Be unfortunate enough to watch a cursed video, then you receive a call telling you that you'll die in seven days. This will come to fruition unless you make a copy of the video and fool another unfortunate person into watching the video, and pushing your death sentence on to them. So pretty simple concept. Watch video and die, or copy it and someone else dies. A simple idea, how could you go wrong?

Well, Rings tries too hard to reinvent the wheel. In an attempt to modernize the film, the hardcopy VHS has been changed to a digital video. While it is meant to accelerate the danger (how often do we watch videos or click on a link online? multiple times a day), but the loss of the physical tape, a tactile object, and the ease with which one could make someone watch a digital clip, means the threat from the video is suddenly non-existent.

The film has a lot of build up, with very little payout. In terms of the opening scene, we have a great opening sequence, that builds up to nothing. It skips out the action, and much of the problems seem easily avoidable, so you lose interest in whether the characters survive or not.

As far as the cast go, that should be a tell-tale sign. If you recognise the names of the actors and actresses, that usually means the big names are meant to distract from the muddles excuse for a backstory and plot. Unfortunately the likes of Johnny Galecki (Leonard from Big Bang Theory), or Vincent D'Onofrio (known for many things including his parts in Full Metal Jacket, Daredevil, Law & Order, Men in Black, and Jurassic World) can't make up for the incomprehensible storyline.

In my experience with horror films, the successful ones are simple. Less is more. Rings tries to be bigger than it is, and leaves the audience frustrated or apathetic, rather than engrossed and in suspense. An unfortunate addition to the franchise

"Barnyard" is a lighthearted tale centering around Otis, a carefree party cow, who enjoys singing, dancing and playing tricks on humans.

Unlike his father Ben, the respected patriarch of the farm, and Miles, the wise old mule, Otis is unconcerned about keeping the animals' humanlike talents a secret. But when suddenly put in the position of responsibility, the 'udderly' irresponsible cow finds the courage to be a leader.