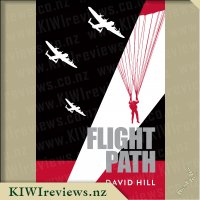 A gripping novel for young adults that captures both the daring and the everyday realities of serving in the Air Force during the Second World War, from the author of the bestselling, award-winning "My Brother's War".

Eighteen-year-old Jack wants to escape boring little New Zealand. But he soon finds that flying in a Lancaster bomber to attack Hitler's forces brings terror as well as excitement. With every dangerous mission, he becomes more afraid that he'll never get back alive. He wants to help win the war, but will he lose his own life?

Along with telling an exciting story, "Flight Plan" highlights New Zealand's involvement in significant world events, conveying a vivid idea of what it was like to be in the Air Force and bombing raids while providing an important history lesson.

When I started reading, I thought at first that the story was going to annoy me. The very start had racist overtones which made me feel uncomfortable, although to be fair it was echoing some of the attitudes commonly held in provincial New Zealand at the time. However, I realised as I read on that this was purely a literary device on the author's behalf to show the development of Jack's character into a likeable, sensitive young man who quickly learns that prejudice is not something that will define him - he learns to look beyond differences to the commonalities beyond.

In fact, as the story unfolds, the reader is shown just how Jack's impressions of the "Pommy toff" soon change as he gets to know and respect Julian. By the end of the book, Jack and Julian, together with the other five who make up the crew of F Fox, are firm friends - so much so that they are effectively more like brothers. The bonds that form when a group is under pressure and the members have to be there for one another are incredibly strong, and it is this shared strength that they all draw on when they have to fight.

Several encounters with the enemy are described in detail; in fact the greater part of the book is devoted to full descriptions of the dangers and excitement of battle in the air. What makes the story flow, however, is the variety of events. Each flight is different so the reader is never bored.

After I had finished reading it, I passed it on to Mr 12 and Miss 14. Both of them are great readers. She likes war stories while he likes action. This book has a bit of both so I thought they might both read it - and they did. Mr 12 found the sections describing aerial combat fascinating and was inspired afterwards to look up the Lancaster planes on the internet. He was intrigued to find that the rear gunner or tail end charlie really did sit on his own and was quite isolated from the rest of the crew.

Miss 14 was slower to get finished; in fact, as I write this review, she is still on the last 50 pages, but she assures me that she is enjoying it just as much as her brother and I did. She was interested in the clothing that the airmen would have worn then. She did not think she would have liked to be on one of the missions as it would be scary and very dangerous!

I like books that engage the reader by sustaining the flow of the story, but also include interesting historical facts. For instance, I was not aware till I read the book that Perspex has been around for quite some time. I thought it was a post-war invention, but I was wrong! I was also not aware that volunteers from overseas came to join the RAF via Canada. That just goes to show that you are never too old to learn something new. Now I am hoping there will be a sequel. I want to find out what happened to the twins, and of course whether Jack succeeded in taking Eileen to see Lake Taupo!

"Hey, look at clumsy Gerald," The animals all laughed, "Giraffes can't dance you silly fool Oh Gerald, don't be daft!" Gerald would love to join in with the other animals at the Jungle Dance, but everyone knows that giraffes can't dance ...or can they?

Giraffes Can't Dance is a touching tale of Gerald the giraffe, who wants nothing more than to dance. With crooked knees and thin legs, it's harder for a giraffe ... more...