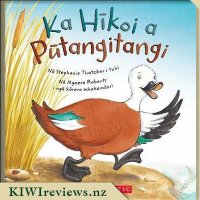 Cheeky Putangitangi the paradise shelduck is looking for her friend. What will she do when she finds him? A fun story about two playful little ducks - and a frog!

This is a lovely story about the simple pleasures of life. The cute and colourful illustrations by the author include a little frog that children will enjoy pointing out on each page spread.

The book is written in Te Reo Maori - suitable both for pre-schoolers and for those who are just learning to read. There is a Maori-English rarangi kupu (vocabulary list) included for those who need help with some of the unfamiliar words.

Being an early childhood teacher I love the fact that Scholastic are bringing out more books in both English and Te Reo. If there is a choice of getting a book in English or Te Reo I tend to go for Te Reo because there is not many of them around. I have basic Te Reo and like to be able to share my knowledge with the children I work with and stories is a wonderful way to be able to do so.

Ka Hikoi A Putangitangi is the most delightful story of friendship and I loved the cheeky nature of Putangitangi as did the children I work with. The illustrations in this book are amazing, they are bright and appealing to children. There was lots of chatter between us about the different pictures and they loved hunting down and pointing out the frog on each page. Both the story and the pictures provoked a lot of conversation between the children.

The book is an easy read even for those just learning Te Reo. The added translation at the back is a great addition. I like being able to refer to it when there's a word I'm not quite sure about. I can't wait for more books to be released it Te Reo so I can continue to grow my library. This is such a delightful way to introduce our children to some of our native fauna. The twins were thrilled to receive another book in Te Reo and to help me review it - and this time their little sister, Miss 10 Months, was able to help as well. She copies her big sisters in everything now, so when they settled down to listen to the story she climbed on to my knee and joined in. Growing up bilingual, they are able to enjoy the story in either language, but I chose to share this version rather than the English equivalent because there are fewer Maori language books available.

The colours are bright and cheerful. While the twins were able to sit and listen quietly as they looked at the pictures, Miss 10 Months examined each one carefully, patting it and tracing the shapes before allowing me to turn the page. Occasionally we went backwards (much to the twins' annoyance) so she could have another look at the previous page. She also tried to peel the pictures off the page and was surprised when they would not move!

The story is nicely told, dealing with themes of friendship and enjoying doing things with your mates. The twins are now at a kohanga for part of the time and are learning to get on with other children, so this is a theme they can relate to. Although they get on well together, they are learning to make other friends, just like Putangitangi and her two hoa. Their favourite part was when Putangitangi jumped out and shouted KA POHU! They loved the expression on her friend's face when she frightened him - Tuakana said that Teina makes the same sort of face when she jumps out at her!

We then had a commercial break while all three lay on their backs on the floor, waved their legs in the air, and giggled. They were copying the putangitangi and their other friend, the poraka, of course - which is fair enough. Nothing like interacting with the story!

As with other books in this series, there is a wordlist in the inside back cover for children (and parents) whose Maori is not so fluent. This means that those whose reo is a little rusty, or those who are learners, can read the book with confidence knowing that there is a backup included! I am sold on the whole idea, and look forward to seeing the next book in this edition.

The price of glory!

From the ancient citadel of Dragonstone to the forbidding shores of Winterfell, chaos reigns as pretenders to the Iron Throne of the Seven Kingdoms prepare to stake their claims. As a prophecy of doom cuts across the sky - a comet the colour of blood and flame - five factions struggle for control of a divided land. Against a backdrop of incest and fratricide, alchemy and murder, the price of glory is measured in blood.