ProdID: 7595 - Manchester by the Sea
Directed by Kenneth Lonergan 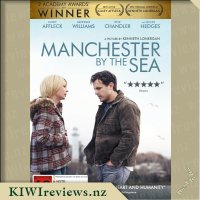 Manchester by the Sea product reviews

I was lucky enough to receive a copy of Manchester by the Sea on DVD through KIWIreviews. Reading the synopsis I wasn't quite sure what to expect from this movie as it was reasonably open ended in the description. I have been trying to watch movies that are different from my normal, so this was a great chance to do that.

I found the beginning of the movie very confusing. It may have been just me, but I struggled a little bit to get the gist of what was going on. Once I was able to distinguish between characters it became a little easier and I soon realised that the movie was jumping between the present and the past. I am not someone who knows lots of actors and actresses, so this may have been part of the problem as it took me a little bit to be able to identify the two main male characters and once I had this it was very easy to know what time each scene was set in.

Once I got to the end of the movie I wasn't quite sure how I felt about it. It seemed long, and felt like it just ended, without any real feeling of completion. There weren't any hugely interesting moments, but then it managed to hold my attention for the duration of the movie. I then started to think a little further about it, and realised that while it didn't have any really big stand out moments, the movie itself really reflected real life. And this was probably the reason why there were no huge stand out moments, as there weren't any unrealistic highly dramatic moments within the movie. The events were real and the emotions were too. After making this realisation I decided that it would be worth watching the movie again, focusing more on the raw emotion that is displayed so well by the actors within the movie and taking it as it comes instead of waiting for a big moment or a happy ending.

When a mild-mannered Uber driver named Stu (Kumail Nanjiani) picks up a passenger (Dave Bautista) who turns out to be a cop hot on the trail of a brutal killer, he's thrust into a harrowing ordeal where he desperately tries to hold onto his wits, his life and his five-star rating. Directed by Michael Dowse, this action-comedy also stars Iko Uwais, Natalie Morales, Betty Gilpin, Jimmy Tatro, Mira Sorvino and Karen Gillan.