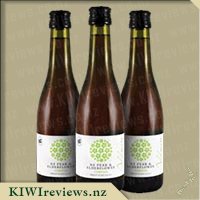 Disclosure StatementFULL DISCLOSURE: A number of units of this product have, at some time, been supplied to KIWIreviews by the company for the purposes of unbiased, independent reviews. No fee was accepted by KIWIreviews or the reviewers themselves - these are genuine, unpaid consumer reviews.
Available:
at selected retail outlets

Elderflower beverages, created with care and unsurpassed integrity, provide a uniquely refreshing non-alcoholic drink. These products are diverse, great for all the family and all occasions. Summer in a bottle, perfected.

Addmore Elderflower Cordial is the flag ship of our beverages range. Creamy, aromatic flowers of the Elder tree, full of sweet exotic flavour, are packed into every bottle.The cordial can be diluted with cold or sparkling water for an effervescent 'pick-me-up', or added to hot water for soothing drinks.

Add to fruit punches or sophisticated cocktails or made into playful jellies. Elderflower cordial is an essential for everyone's pantry. Having tried the plain elderflower cordial in this range, I was keen to try a variation on the original. I am not sure what I expected, but I found it very pleasant and refreshing. I was going to a party so I took this bottle and another one (a different variety) with me. Most of the people there would be looking for a non-alcoholic drink as they were driving, so this would be useful to try as an alternative to water or carbonated drinks.

I found I needed to mix the syrup at a slightly higher concentration than that indicated on the label. At the recommended strength it was a bit watery, but rather than measure exactly I added a little at a time and kept stirring and tasting. I went through five clean spoons before it was mixed to my satisfaction, but my friends assured me that the mix was now correct.

Everyone had a taste and then we compared reactions. The most popular feedback was that it was really refreshing and because it was not carbonated might be better for the digestion. Several people mentioned that they could clearly taste the pear in the background. I would agree with them; you could smell the pear when the bottle was first opened, and there was a distinct pear flavour to be tasted. In fact, the pear was more prominent than the elderflower which is of course a very subtle flavour.

We had mixed the cordial with chilled water, but I decided to try it hot as well. I made just one cup with syrup and boiling water, but on balance I preferred the cold version. Heating seemed to take away some of the flavour and the mix had less natural sweetness than the cold version. Nobody else wanted to try it hot - the room was warm and the cold drink was very successful - so I decided to leave them to enjoy the drinks as they preferred.

During the course of the evening, we were served a dessert consisting of plain ice-cream and tiny meringues. This was too good a chance to miss so I poured two teaspoons of the neat drink on to my ice-cream. This was delicious, and a couple of my friends immediately did the same thing since I was clearly enjoying it. Unfortunately, we had almost finished the bottle, and the other bottle I had brought was already empty, so a few of those who were interested in trying missed out.

The overall verdict was very positive. All those who tried it liked it and said they thought it was a good drink to have at a party as the taste was quite sophisticated. Even the bottle got its share of praise as people liked the clean lines and the understated label. As one person said, "This is a classy drink!"

Growing up visiting my Nana and Grandad was always exciting as they owned a small Pear Orchard and I loved eating a thousand pears at a time. They were always so soft and squishy and tasted divine, nothing like the rock hard pears you get at the supermarket. My Nana would peal the skins off and cut off any bruised areas and I would just eat them until basically I was ready to pop. Since then I have adored Pear flavouring in everything especially Cider. In both pregnancies I experienced morning sickness and the only thing I could stomach was fresh mandarins or Wattie's pear with all that yummy juice.

I have never experienced Elderflower so was really unsure what to expect. Looking over the bottle I had a feeling of elegance and as soon as I opened the bottle I smelt Pears and my mouth was watering. The instructions were easy 1 part cordial to 10 parts water. As I was concerned the first time having it that it would be too weak we tried 9 parts water but really 10 works just fine. We made one glass and shared between us and since it disappeared before we really got a taste we made again this time using a soda stream bottle so it could last a night at least.

Pouring into glasses we all drank again. My concern at first was the colour seemed rather weak and as I tasted it I could get the faint taste of pear but I was unsure quite how I felt. But I have to admit we have now had it over the past four nights during dinner and the taste has definitely grown on us all. My girls love it and both finish rather quickly and go fill more up where as mine seems to last a little longer. Maybe because a little seems to go a long way with me and where as I am not a fast drinker anyway I find the little bit very refreshing.

Initially I was quite taken back by the price but when you consider how much we have drunken over the past four nights and how much we have left it is really well priced. A little goes a long way and as we are usually water drinkers its nice to have something special during dinner. Even drinking it alone I find it goes down beautifully. I like you can make it as weak or strong as you like and the fact you could have in a hot drink is something I am curious about but have yet still to try. My youngest really only drinks water and occasionally milkshakes but the fact that she finishes a glass and asks for more says a lot. Something I would consider keeping in the fridge in the future.

Unlike the Elderflower Sparkling Rose I had to share this elderflower cordial with other family members which I admit I struggled with, I loved it and would love to have said it is mine all mine!! The elderflower taste came through nicely with those sweet notes, even with the addition of the apple I still felt that the elderflower was prominent. As a child my nana made elderflower wine for us and it was probably more like the addmore original variety as it wasn't as sweet as this so perhaps the pear adds a different flavour.

Being a cordial the bottle is a good size as you only use one part cordial to 10 parts water and I loved the suggestion of using sparkling water which I tried as I had loved the sparkling rose I also received to review. For me personally I loved mixing this with hot water for a hot drink and think this is a perfect winter night treat as opposed to a milky drink, it still has that warm comfort factor and the level of sweetness is perfect!

My children enjoyed the cordial, my son mentioning that he could not taste flowers I think he was expecting something different when I told him it was elderflower cordial. In fact a visitor to my house who had never heard of elderflower had asked me if it tasted like flowers because they couldn't imagine that being nice. Pleasant surprise for them too after trying some. To me I don't get a floral taste you certainly have those perfumey notes but the sweetness is more prominent.

I actually liked the thickness of the cordial syrup I was shocked when I used it first expecting it to be a bit looser it really was quite a thick consistency and as I had seen it suggested on the KIWIreviews website that you could use it as a desert syrup so I did try it on icecream. Slightly looser than say a chocolate ice cream syrup but still completely enjoyable and a nice treat with vanilla icecream.

The perfect mix of coffee and chocolate. This will leaving craving for more.

Each box contains 10 individual serving sachets. Great for popping a couple into your travel bag for those long road trips.