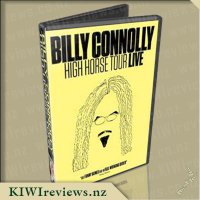 Who discovered we could get milk from cows, and what did he THINK he was doing at the time?

The legend returns in his 'High Horse Tour'! Connolly's one of the all time greats of stand-up. Without him, modern comedy would look very different indeed.

Ever since his first, iconic appearance on the Parkinson show back in 1975, Billy Connolly has enjoyed an indelible presence in the nation's heart and has been voted the best stand-up comedian ever.

Oh lordy, was this a mixed bag for me. On the one hand, you have the sharp and cutting insights into our lives today that are delivered in a way only Billy can do - incredulity mixed with amusement, dosed with cynicism but tempered with self-depreciation as a fellow fallible human being. On the other hand, my heart was torn by the decline in Billy's health as his Parkinson's Disease sinks its fangs into his failing flesh.

What made it all the more heart-rending was that Billy not only pointed it out, but attempted to make light of it, ascribing a mentality to his "wandering left arm". The total lack of Billy's trademark hyper-antics on stage made this show all the more poignant, as it could very well be one of his last shows ever. He stood on stage, within reach of a stool, almost utterly immobile, his left arm and leg all but still, and what little gesturing he did do was with his right arm only, and minimal at best. It's not the way I want to remember one of the greatest comedic talents I have had the honour of sharing a cup of tea with.

Overall, while not the greatest show he has ever done, in terms of the sheer energy and entertainment value, it is a valuable addition to the collection for any fan of The Big Yin, if for no other reason than it may be the last one you're going to get from him. I dearly, deeply hope I am utterly wrong on that prediction. It would delight me no end to see BC back on stage again, in a less awkward posture maybe. Perhaps if he were to have the stage set up as though it were one of those old-style drawing rooms with the big fireplace, and he were to be presented reclining on a chaise lounge, that may cover his mobility issues to a degree and allow the audience to fully enjoy and appreciate his banter without the distraction of his declining health. I think that would be the ultimate show - the way I would like to remember him best.

An astonishing series revealing the extraordinary wildlife and dramatic landscapes of one of the world's most bizarre islands. Lying just off the coast of Africa, Madagascar is a land of misty mountains, tropical rainforests and weird spiny desert scrub. Here, the wildlife has evolved in splendid isolation to become strange and totally unique.

The series captures, sometimes for the first time, the diverse and rare wildlife that ... more...