What Are You Supposed To Be? review 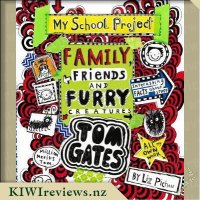 In the 12th hilarious instalment of Tom Gate, Mr Fullerman has a class assignment: a family tree! Tom is ready to learn all about the Gates family, his friends, and a furry creature (or two).

Read about the time he discovers how his mum and dad got together, just how much of their lives cats spend sleeping, and why peppermint ice cream is just WRONG!

But just what is that squeaking sound coming from Tom's shoes?

Crazy For The Storm - A Memoir of Survival
Rating: 9.0

As books go, this is a real gem. It is a hybrid of graphic novel and illustrated text, relying heavily on the illustrations to further the story but including just enough words to flesh out the action. And those illustrations are a sheer delight. They look as though a young child might have drawn them, but manage to convey as much information as is necessary.

Tom, the hero, has been set a homework task with a difference: he has to draw up his family tree which is going to involve lots of research. In the process, he finds out all sorts of interesting facts about his relations - and discovers that his grandparents are not really called the Wrinklies and the Fossils! He also learns interesting facts about his friends, and even applies some of his new-found skills with animal hair to drawing their pictures!

This skill with animal hair, a skill which incidentally gives the book its name, comes about when Tom tries to remove hair and fur from a garment using a piece of sticky tape. In the process, he discovers a new use for the tape as a starter for creating pictures of various creatures. Subsequently, he applies the same technique to drawing pictures of his friends!

Mr Six adored this book. He was able to read a lot of the words himself, but relied on his older brother to help him when he got stuck. He loved the idea of taking baby photos to school as part of the ongoing project, and thought it hilarious when Tom feared his mother might contribute a photo of him sitting on a potty - how embarrassing! Mr Six also laughed at Tom's noisy shoes and was suitably annoyed when Marcus got the fancy sticky tape that Tom had wanted. However, his annoyance changed to delight when the teacher ordered Marcus to share some with Tom.

Another thing that appealed to Mr Six was the inclusion of some fun activity pages - "quiz" questions, a maze, and a riddle. None of these was beyond the scope of a child his age; he attacked the maze with a pencil so he could start again if he made a mistake, and he said he would try the trick out on his brother. He carefully entered his name in the box at the start of the book, adding a couple of stars so it would "look cool".

I am all in favour of books like this that get young people hooked into reading. And if Mr Six' experience is anything to go by, this was a huge success. Incidentally, I was interested to note that, although this is the twelfth in a series of Tom Gates books, it did not matter that neither Mr Six nor I had read the earlier volumes; it is completely standalone and as such can be enjoyed just for itself.

My miss 11 loves the books in this series, and she was looking forward to the latest instalment. The cover seems to draw children toward it, its a cute mix of cartoon images, a variety of fonts and some bright primary colours. Open the book and the pages themselves, are the same eclectic mix of cartoon images, and different fonts and font sizes on each page, adding a sense of fun to the book, before the reader even begins to become immersed within the story.

The story itself is written in the first person, our main character is annotating his day, he's a funny little guy, who seems to be easily distracted by his sense of fun, and this immediately makes me think he's going to get into a few tricky situations. The use of cartoons and different fonts allow young readers to emphasis the text in a very natural manner, making reading a fun and enjoyable experience.

I found myself drawn into the character, he has those terrible childhood experiences that all of us can identify with, such as his brand new shoes that his Mum brought, raspy shoes, which make a terrible noise as he walks the corridors of school, the more he tries to ignore them the louder they seem to get!
Of course the hero of this story has a great idea, nothing can go wrong when you implement a good idea... can it?

There is such a sense of fun through out the book, I can see readers of all ages enjoying this story, I found it such a delightful read, that I took on the task of reading it to my girl (who is very capable of reading it herself) out loud to her at night, as it was a fun experience for both of us. I can see why she is such a fan of these stories, and I recommend these books for young readers, This particular book has a great ending with a moral imparted behind it, (hard work brings rewards) and as a teacher I love books that are fun, easy to read, and have a great moral, embedded within the pages.

My six year old loves the pictures in this book and try's to read it herself but with all the crazy fonts and sizes she struggles with some words. Reading about Toms family has made her want to learn more about her own family and left her questioning why we don't have pets (other than a barnyard of stuffed animals and a plastic jellyfish) and why snacking isn't a hobby. I've also had to explain to her that although some pictures look like they are for colouring in, they aren't. My 11 year old said the book was OK and a bit of a laugh but rather easy for her to read and was more of a quick read than a story. She related well to Tom with his noisy shoes and forgetting important things for homework.

I myself was taken back to my younger years as I haven't read a book like that in such a long time. I loved Tom's answers and responses to some of the questions/challenges put to him. I must admit I was a bit like that in school too. I recommend anyone with children around the 7-12 year range check out this book as well as the others by this author. I know I personally can't wait and being scholastic makes it even better and easier to get.

Boris loves to eat green worm porridge, even though it upsets his belly. When his belly starts to grumble and growl, growl and rumble, rumble and grumble, he knows just what is going to happen.

He keeps blaming Dog for the stinky smell - and dog is not happy about that at all.