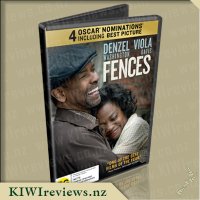 Fences is the story of Troy Maxson (Denzel Washington), a mid-century Pittsburgh sanitation worker who once dreamed of a baseball career, but was too old when the major leagues began admitting black players. He tries to be a good husband and father, but his lost dream of glory eats at him, and causes him to make a decision that threatens to tear his family apart. I wanted to like the film, when I first read the synopsis, but it turned out to be very difficult for me to watch. Not because of the content, but instead the delivery method. I'm a man that struggles with accents, so when I get an accent, at speed, I will start losing bits and pieces of the conversation. Next thing you know, I'm lost, and all I know is that Denzel Washington has said "N*****" a heck of a lot of times.

One of the main differences between watching a film at home vs in the theatre, is the amount of distractions. In the cinema, you have no choice but to pay full attention to the film. At home, however, you may have someone talking to you, you may be doing chores, surfing the web, checking Facebook, there is a plethora of activities that could distract you from full attention. This is a film that requires your full attention; the plot is driven by the fast-spoken dialogue, and it is something you must be attentive to to fully appreciate. One of the positives about watching at home is that I can pause and re-watch things that I've missed.

The film is shown in low saturation, giving the film a dated, and pre-dusk feel to it. But the most significant thing that makes this film different is that 98% of the film takes place on the one location. Events occur, but they will either occur on the location, or just be talked about with another character on location. Rarely, do we glimpse outside of the confines of the lot, and that is what makes the acting, and the dialogue all the more important.

It took a while to really get invested in the film. HOWEVER, it is a slow-burner, that builds towards a tipping point. A tipping point that was unexpected, out-of-the-blue, and instantly threw a curve ball (pun fully intended) into how I saw the movie playing out. Suddenly there was a real plot line. Suddenly you care about the characters. Suddenly I was invested. The second act of the film, switches the film from an antiquated biopic, to a suspenseful drama.

In all honesty, I disliked all of the characters in the first act, with the exception of Jim Bono (played by Stephen Henderson). Bono was the face that brought comfort, and was the grounding force for the film. Viola Davis does a convincing job emoting Rose's pain, and for someone who has very little dialogue input into the film, does brilliant work with facial expressions and actions.

Underlying the whole movie is the theme of white privilege, about the effects of racial segregation, stereotyping, and the trickle down effect it has on the mental health of the families affected by it. It doesn't affect one person, it affects the entire community; children included. It's a thought provoking piece, that I initially didn't like the look or sound of, but the second half really reeled me in, and now I see why the critic ratings are so high.

"The Help" features three very different, extraordinary women in Mississippi during the 1960's, who build an unlikely friendship around a secret writing project that breaks societal rules and puts them all at risk.

From their improbable alliance a remarkable sisterhood emerges, instilling all of them with the courage to transcend the lines that define them, and the realization that sometimes those lines are made to be crossed ... more...