ProdID: 7531 - Doctor Who - The Return Of Doctor Mysterio
Type of Show: Sci-fi 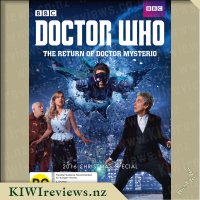 Doctor Who - The Return Of Doctor Mysterio product reviews

The Doctor returns for an epic Christmas adventure.

With brain-swapping aliens poised to attack New York, the fearless Time Lord teams up with an investigative reporter, a familiar bumbling figure in a duffel coat, and a masked superhero known only as The Ghost. Can the Doctor save Manhattan from the deadly alien threat? And what will be revealed when we see behind the mysterious new hero's mask?

My children and I awaited the return of Doctor Who with great anticipation, having been forced to go a year with no new Doctor Who after 'The Husbands of River Song' aired in 2015. As soon as trailers for the 2016 Christmas special began airing the kids and I were watching any little tidbit we could, after all it was Doctor Who and then for added effect... A superhero.

This episode is based in New York (but filmed in Cardiff) and while its focus was on the present we do get flashbacks, because every superhero needs an origin story, and without spoiling anything, I can mention that the Doctor is involved in the how, though we're never told the why. The Ghost, aka Grant, is a nanny to baby girl, who's mother is the journalist investigating the mysterious big company that's spread out throughout the world. This episode had plenty of lighthearted moments, such as Grant + puberty + X-ray vision, the relationship between Grant and Lucy (the journalist) and new companion Nardole (who is much more fun in this episode than the previous). There are also a few sad moments, after all the events with River are still fresh to the Doctor and there are a few nods to that fact (such as Grant stating he's loved Lucy for 24years, which is how long the Doctor just spent with River) and so on.


There were plenty of special effects, as one expects, including explosions, flying and hanging off tall buildings to name but a few. The Ghost meets all the typical requirements of a superhero while managing to keep to his own, though I love the nod to Superman and that no one realises that he and Clark Kent are one and the same. The dvd gives us a behind the scenes look into the episode, giving us some insight into how the scenes were filmed and even showing that one scene took inspiration from old school Batman and how they shot Batman and Robin climbing up the outside of a building.


A second behind the scenes gives us more in depth knowledge of behind the scenes, and Lucy is very British, not at all American, so her accent was pulled off well. There are a few pop culture nods, such as the Doctor flooding a building with Pokemon. We all agreed that the aliens had some disgusting moments, they could pull their head in half, which gave an opportune moment or two for the gross factor, though I did have to wonder how, if the vehicle was cramped, how a gun was able to fit in... Other than that, it had sufficient ick factor.


This is one of my favourite Christmas specials to date, it gave a chance to see the Doctor grieve a little for River, a fun superhero and love story thrown in, nods to pop culture and gave a great introduction to a less wingy Nardol. Bring on the next season!!!

Score: 10.0
Product reviews for listing 5417: Islands on The Edge
Type of Show: Documentary

Filmed over the course of a year, Scotland's enigmatic Hebridean islands are the stage of rock and water that offer unrivalled dramatic scenes of contrasting natural forces. From grey seals trying to protect their young from giant waves, to puffins, eagles and basking sharks, this is wildlife at its purest.

Filmed with pioneering underwater macro, aerial and infra-red cinematography Islands on the Edge delivers unrivalled richness of content about a landscape that few of us will ever have the privilege to experience.