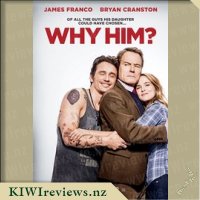 Why Him? product reviews

Bryan Cranston and James France fight the ultimate battle of wits and wills in this outrageous no holds barred comedy from filmmaker John Hamburg (I Love You, Man, Along Came Polly, Meet the Parents, Zoolander).

Ned (Cranston) an overprotective but loving dad, and his family visit his daughter at college, where he meets his biggest nightmare: her well-meaning but socially awkward Silicon Valley billionaire boyfriend, Laird (Franco). A rivalry develops and Ned's panic level goes through the roof when he finds himself lost in this glamorous high-tech world and learns that Laird is about to pop the question.

I guess one thing all parents must go thru is meeting the prospective partner of their child. My parents went thru it and although they did not always agree with my choices it never ended up anywhere like this movie. Mind you, in saying that, I never brought home a man who's every second word was a profanity, nor did I ever bring home a Billionaire who had major daddy issues and was 'extremely' socially naive. Although, I am sure its 'awkward' for everyone I am sure that no one in the world thankfully would going thru this situation.

I find with most comedy movies, you sit there slightly amused and basically they are usually more crude then funny and the acting is rather average. I am so pleased I get to say..... NOT WITH THIS MOVIE! I laughed, I squealed, I cringed, I sat there with a smile on my dial for most of it and I have to say I really enjoyed it. Not at all what I was expecting. It had its predictable moments and it dragged in a couple of areas and slowed right down for a small portion of the movie but it also had you sitting there going 'on no what next'. You knew right from the start it was not going to end well and boy what an ending!

I think the best part of this movie is even though there was some big names associated to it no one seemed to have the top billing, best lines or star in the best parts everyone had 'big moments' and all of them had you laughing, some more than others, but it was definitely one of the best casting in a movie I have seen in a very long time. It actually made a lot of sense when the credits started to roll and I saw Ben Stiller and Jonah Hill were credited for writing the movie and producing it kinda made sense. Its a weird sense of humor but it is beautifully done and full credit is to be given to the cast and crew.

I am not usually one for watching the extras but as I enjoyed the movie so much I just had to watch the Deleted Scenes, Why Him? Gag Reel and 47 minutes on the Can. If you can watch the toilet scene with a straight face full credit to you. The acting involved for that scene is nothing short of comedic genius. I have found my new favourite actor/comedian Keegan-Michael Key every scene he was in I laughed a truely gifted actor. I just had to watch any extras that involved him and got rather excited when he has a whole area dedicated to himself personally.

This is definitely one of my new favourite comedy movies ever. It had a main story to it which carried right thru and it showed how the other half lived and I have to say I am happy with my privacy where no voice from the roof (Kaley Coco from Big Bang Theory) is eavesdropping into your personal conversations. I think they covered every basis with this movie and it is a total gem especially the Moose in the Glass Casing or the amazing interactive Toilet. If you have a weird sense of humor and don't mind swearing then this is the movie for you.

In 1979 young Donna, Tanya and Rosie graduate from Oxford University - leaving Donna free to embark on a series of adventures throughout Europe. On her journeys, she makes the acquaintances of Harry, Bill and Sam - the latter whom she falls in love with, but he's also the man who breaks her heart.

In the present day, Donna's pregnant daughter, Sophie, dreams of renovating a taverna while reuniting with her mother's old friends and boyfriends on the Greek island of Kalokairi.