Beauty and the Beast review 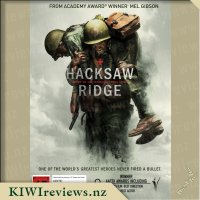 Hacksaw Ridge is a 2016 biographical war drama film about the World War II experiences of Desmond Doss, an American pacifist combat medic who was a Seventh-day Adventist Christian, refusing to carry or use a firearm or weapons of any kind. Doss became the first conscientious objector to be awarded the Medal of Honor, for service above and beyond the call of duty during the Battle of Okinawa.

The Mountain Between Us
Rating: 9.8

I have never been too adventurous with my movie choices, usually opting for something easy like a comedy, or a romance, or even a romantic comedy! I find it hard to sit still and concentrate for a long period of time on movies, so with something a little light hearted I can muck around with some of my crafty hobbies while watching a movie and still make sense of this. When Hacksaw Ridge came up for review I thought it would be the perfect chance to try something that isn't my usual kind of pick. I am pleased I did.

Reading the synopsis of this movie it was hard to believe that it was based on a true story. I mean, what person could go to war and refuse to use a weapon?! Even knowing that it was a true story and that he survives, I spent most of the movie waiting to see him get killed because he didn't have a weapon to defend himself with. The war scenes were very detailed, and at times a little hard to watch, but this made it even more believable. There was one point in the movie that I started to question why people even go to war, seeing the countless people get killed, and the injuries that many of them received. We were given snippets of his life as a child which gave the back story as to why he made the choices he did. These bits were included in an effective way, they didn't drag on as some movies can do, but gave us the information that was needed to understand the later part of the movie.

Desmond Doss is one amazing man. The amount of people he saved, all without using a gun to defend himself was amazing. This movie certainly kept me on the edge of my seat wondering just how he would do it. Andrew Garfield was a brilliant choice to cast as Desmond Doss. This certainly was a great accolade to Desmond Doss and the work he did. I recommend it highly to anyone who hasn't seen it.

Score: 9.5
Product reviews for listing 3528: Tinker Bell and the Secret of the Wings -  Directed by Peggy Holmes

Journey with Tinker Bell and her fairy friends into the forbidden world of the mysterious Winter Woods, where curiosity and adventure lead Tink to an amazing discovery and reveals a magical secret that could change her world forever.