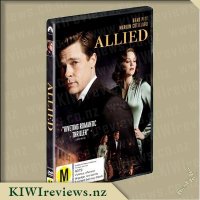 Disclosure StatementFULL DISCLOSURE: A number of units of this product have, at some time, been supplied to KIWIreviews by the company for the purposes of unbiased, independent reviews. No fee was accepted by KIWIreviews or the reviewers themselves - these are genuine, unpaid consumer reviews.
Available:
in online and physical retailers

Max Vatan (Brad Pitt) and Marianne Beausejour (Marion Cotillard) are World War II operatives who never reveal their true identities. After falling in love during a risky mission, they hope to leave all that double-dealing behind them and start new lives.

Instead, suspicion and danger envelop their marriage as both husband and wife become pitted against each other in an escalating, potentially lethal test that has global consequences. Brad Pitt certainly does love his World War Two era movies. With 'Inglorious Basterds' and 'Fury' already under his belt, Brad Pitt once again takes on the role of a World War Two Allied serviceman, with a 'Mr & Mrs Smith' twist to it. Now it is very important to point out that the first act of the film is set in Morocco, and involves a fair chunk of foreign language. I actually ended up watching a good 20 minutes of the film, trying to take note of all the objects that the camera would focus on, and take note of any odd movements or mannerisms, before I thought to check the main title menu, and find that English subtitles were in fact available. Re-watching that initial 20 minutes, it made much more sense now that I was able to understand what every character was saying. So...BEFORE YOU HIT PLAY, PICK SUBTITLES.

The movie is split into two main story arcs, the Moroccan arc, where the two main characters first meet, and the London arc, where their story concludes. The two arcs are strung together by a mish-mash mosaic of memories. This montage of important moments, that while significant to the characters themselves, have little relevance towards the movement of the plot, and are thusly skipped over.

The plot itself is enjoyable. We are fed an action, suspense film through the eyes of a romantic. Everything is displayed in a way that is bathed in emotion. Every action has a multiple consequences for these two operatives, who must decide who they are lying to; their allies, their enemies, each other, or themselves. With two characters, who are both immediately revealed to the viewer as spies, it sows a seed of doubt to everything that is said and done, as we have no baseline to base anything from. We have no backstory, it all starts with a lie, and you never truly know whether the truth has been revealed.

A much slower war era film, we are treated to a film that takes a look at the working behind the scenes, away from the frontline, where lines are blurred, and despite being at war, much of the world continues to move on as if nothing has happened. The visual environments are stunning. Everything has a vintage hue, the style of dress, the vehicles, and the housing, all adds to the cohesiveness of the environment.

The cast were good. Both Brad Pitt and Marion Cotillard looked like they fit right in with the era, and were irregular enough in their characters personalities that you really didn't know whether you were in for subtle conversation, or guns blazing. They did wonders, keeping the viewer guessing throughout, as there was always a number of available outcomes at every junction.

I honestly would have enjoyed more passion from Brad Pitt's character, as he did come off as rather unemotional and aloof, but Marion Cotillard did magnificently and kept the engagement level high. An enjoyable film, considering all of the action was treated as emotional ammunition, so it all had a deeper meaning to it. A film that keeps you thinking throughout.