The Girl on the Train review 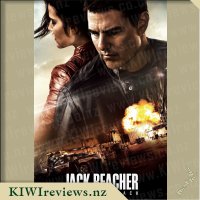 Disclosure StatementFULL DISCLOSURE: A number of units of this product have, at some time, been supplied to KIWIreviews by the company for the purposes of unbiased, independent reviews. No fee was accepted by KIWIreviews or the reviewers themselves - these are genuine, unpaid consumer reviews.
Available:
in online and retail stores

When Army Major Susan Turner, who heads Reacher's old investigative unit, is arrested for Treason, Reacher will stop at nothing to prove her innocence and to uncover the truth behind a major government conspiracy involving soldiers who are being killed. Just for the sake of full disclosure, I haven't seen the first installment in the Jack Reacher movie franchise, but I have read a couple of the books. As an action film, Never Go Back is a reasonably well done film. We are provided another cat and mouse plot, with the protagonists racing to uncover a secret while themselves being hunted by the antagonists. A recipe for a fast paced thriller.

The casting of Tom Cruise in the role of Jack Reacher is an odd one, as he does not have the right dimensions or personality to correctly encapsulate the Jack Reacher of the book. In fact in the opening scenes when Cruise has his first "being followed" incident, it sounds as is he is trying to force his voice to sound deeper and gruffer than it can naturally go (see Christian Bale's "Batman" voice). Tom Cruise comes across as a smarmy, cocky, and rather self-centred person; an odd choice of personality for someone that I am meant to empathise with. However, if you ignore the Jack Reacher source material, the film is good.

The casting choices in general weren't bad, but they weren't inspiring either. None of the characters really came across as genuine, and it failed to properly engage me. While Reacher's spontaneous decision making style works well in the books, it doesn't translate too well on screen, and you end up with a film that lacks subtleties and depth, turning it into a Saturday night popcorn action flick, rather than a deep thinking film. Even Cobie Smulders is no help in improving the film. Finally starting to separate herself from the "How I Met Your Mother" role, she has been pigeon-holed in military roles due to her general lack of emotion and bland vocal style, and yet even in such a role, she fails to come across as authentic, instead seems held back, and lacks the strength, motivation, and direction that Tom Cruise's character has.

As with most Hollywood films these days, all of the thinking is done for you, with many explanations from the antagonist's point of view that ruin a lot of the surprise and potential tension. The amount of death in the film was rather a surprise. It did come across rather gruesome and over-the-top at times, and seemed like it was being used as a convenient method of driving the plot progression far too often.

Did I enjoy it? I didn't hate it, but I didn't love it. It was an above average action flick. It barely touches the thriller category that it tries to classify itself in, but is certainly a fast-paced action film. I good film to enjoy with friends and family, but not one to dissect or think too much about.

Ex-smuggler Chris Farraday (Mark Wahlberg) gave up his criminal ways long ago. But, he's forced back into the game after his brother-in-law, Andy (Caleb Landry Jones), botches a drug deal for a crime lord (Giovanni Ribisi), leaving Chris to settle the debt. With the help of his best friend (Ben Foster), Chris assembles a team to run to Panama to retrieve a fortune in counterfeit bills. When things go awry, Chris must call on his rusty skills to complete the task before his family pays the price.