« Torty And The Soldier review 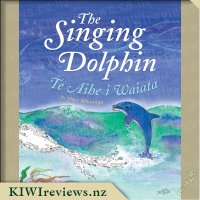 Every once in a while, a dolphin will come to the island beside Te Ara A Paikea (The Pathway of the Whales) at Mahia. It will leap and play with people, bring gifts, and sing songs. The story was inspired by the real dolphin Moko who lived and played there from 2007 to 2009.

Award-winning author Mere Whaanga tells a story of land, sea and seasons; of living creatures and family ties, and the songs that connect us all.

The book is presented in both languages, Te Reo Maori and English, with the two texts alongside each other. It is also available in hardback edition.

In the early childhood education sector there is a big focus on promoting te reo Maori within our learning environments. For some teachers this is easy, for others it is a bit more work to build the habits of using te reo Maori within the centre and using a range of terms. I am always on the look out for books and other resources that I can use in my centre to support myself and the other teachers to increase our use of meaningful te reo Maori in our centre. When I saw this book up for review I decided to put my request in, and was happy to see it buried in my latest review parcel.

One thing I really like about this book as a resource is that it has both te reo Maori and English words in it. Some books you get have only te reo Maori, and for someone like me it can be very hard to translate it depending on how complex the language is. It also means that I can incorporate a little bit of Maori here and there as we go, allowing the children and myself to learn it little bit by little bit without taking on a whole book full of words and sentences.

The pictures in this book are all very natural. In children under five the pictures are important as they have a big impact as to whether a book captures the interest of the children or not. It also helps them to be independent in exploring books as they rely heavily on the pictures to be able to tell a story. The pictures used in this book are reasonably detailed and it soon become a bit of a hide and seek game to find all of the animals that they could. This allowed me to bring in a focus on counting as we counted how many of each animal we could find in some of the pictures. I also brought in a focus on colours and naming the te reo Maori words for the colours, along with the sign for each colour (as sign language is a focus for us too).

Myths and legends play a big part in Maori culture, and this book certainly helps teachers like myself expose the tamariki to these legends. This book caught the interest of most of the children in my centre, and I was able to find ways to use the book to capture the interest of others. While it won't be requested by children very often (as only a few books make it onto that list!) it is one that will be used by the teachers to incorporate some Maori language into our programme. What a fantastic idea! The twins are on the way to becoming fully bilingual, and having a book like this is so good because little ones often want their favourite stories read more than once - and this means they can have it once in each language.

Teina took the book and busied herself looking through the pictures before we had all organised ourselves to read it together. She liked the pictures and I have to say I agree with her - the predominant shades are blues and greens, perfectly in keeping for a book about a sea creature. The drawings are skilfully interwoven with the text so that they spill over both pages, encompassing both the Maori and the Pakeha.

Once we were all piled on the sofa - Tuakana, Mr Seven, Miss Five, Teina and me - we began the story. I read it to them in English the first time through, then a second time in Te Reo. There were the usual holdups as we went along - they thought it was very funny that Rua was a brother rather than a sister as I have a niece called Rua, and Miss Five thought that one of the drawings of Potiki was really Teina, so we all had to laugh at that.

It was not long before they were all feeling sorry for poor old Potiki who was never old enough to do Big Boy stuff. When his brothers were horrible to him, the children became angry and said they were glad that he had run away and found a new life for himself. They thought it was unfair that his brothers were so mean to him. Of course, they are always totally supportive of their own siblings - but I wisely said nothing!

I would like to make special mention of the introduction. When I read it to them, they were all taken by the second line "ka whiowhio mai te hau". Tuakana started repeating the words and reciting them in a sort of echo. Then the other three started to repeat them too. There was a kind of magic for them in this small section of the poem and it resonated. It was a sweet and completely impromptu reaction.

I love the way that the story is based on a real dolphin and a real event. It makes a story special when it is situated in places that some of the readers may have visited, and its New Zealand ties are emphasised through its use of the Maori language and its links to other legends of our country. Our children are lucky to have access to books like this that echo our heritage.

In a battle of armies and sorcerers, empires will fall. After young Caldan's parents were slain, a ... more...