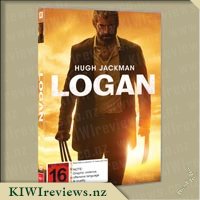 In the near future, a weary Logan cares for an ailing Professor X in a hide out on the Mexican border. But Logan's attempts to hide from the world and his legacy are up-ended when a young mutant arrives, being pursued by dark forces.

This is probably one of the hardest reviews I have ever had to write. Not because there is little to write about or I disliked the film, but because it is really hard for me to write from a non-biased perspective with regards to this film. Logan is the final film for Hugh Jackman (and rumours also say Patrick Stewart) who have played Wolverine (and Professor Charles Xavier) for the last 17 years. Hugh Jackman has reprised his role as Wolverine in every X-Men movie to date (excluding Deadpool, although he was heavily referenced), so I have a lot of history watching this character evolve and develop over time.

But back to the movie as a whole. Logan comes with an R rating; the first X-Men movie to have such a rating (thanks to the success of the R-rated Deadpool movie), and it quite rightly earns that rating. Starting from the very first word in the film, you get expletives thrown out, which you initially think is just put in there to get the rating, but the opening scene evolved into a feeding frenzy of violence and gore. Within the first couple of minutes, it has been made clear that this movie is not suitable for children. I repeat: NOT SUITABLE FOR CHILDREN.

The violence and the expletives take on their own role in this film. Every swear word, every severed limb, every decapitated head, every scream of pain, runs deep emotionally. While it doesn't give you the backstory that is often alluded to (the film takes place in the year 2029, many years after all the other X-Men films), you are aware that their lives have taken a serious toll. Both Wolverine and Xavier are mentally and physically bare, struggling to care for themselves, let alone play the role of the hero.

The villains in the film are probably the only real drawback to the film. They lack the history of Jackman and Stewart, and really don't provide a strong enough position to me. I struggle to understand their motives, and there were many moments in the film where they easily could have ended the film right then and there, and succeeded. But they follow the usual villain tropes that allow the protagonists extra chances. I would have also preferred more focus on Logan and Co., as every time it changed view to that of the antagonists, the film slowed and lost its flow. But at the same time, it again helped to emphasize the state of Wolverine; far from the sleek, invincible, unstoppable force that he was in his "youth".

The casting was superb, and I loved all of the performances. You could really feel the connection between the protagonists, going far beyond the "we're on a team" mentality, or doing a mission to save the world. The players act both selflessly and selfishly, and show real family dynamics, with bickering, frustration, and anger, but still overwhelming love and respect. The film's darker, gritty tone was not without its comedic elements, but they were naturally a part of the storyline, every action bringing you further into the connection.

The fight choreography was lively and fun, with noticeable differences in camera use and fighting styles between the protagonists. Very little shaky cam, though there was a bit of the quick edit shots; overall the fight scenes flowed well, and managed to remain fast, and edgy, while still coming across ferocious and brutal. The ending really tugged on the heart strings, and provided the conclusive ending that I was looking for. As I exited the theatre, there were very few dry eyes to be seen, and many audible sniffles and sobs. An emotional rollercoaster that I don't think I could bring myself to watch again; it was the perfect ending to 17 years of Hugh Jackman's Wolverine.

A fallen swordsman (Clive Owen) leads a small army against a sadistic ruler to avenge his dishonored master (Morgan Freeman).