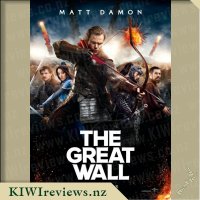 Disclosure StatementFULL DISCLOSURE: A number of units of this product have, at some time, been supplied to KIWIreviews by the company for the purposes of unbiased, independent reviews. No fee was accepted by KIWIreviews or the reviewers themselves - these are genuine, unpaid consumer reviews.
Available:
in cinemas

The Great Wall is a 2016 monster film directed by Zhang Yimou and starring Matt Damon, who plays a European mercenary in China during the Song dynasty. He encounters the Great Wall of China and meets Chinese soldiers who defend against monsters.

I have just finished doing a course on China and I assumed this movie was going to be about the creation of the Wall and would give me more insight into China and its amazing diverse landscape or possibly delve deeper into there beliefs and traditions. Instead I got Matt Damon re-telling a legend while being the Arnold Schwarzenegger of movies and basically being the only man to save the day. The enemy was a cross between an Alien and a Dog with an outstanding ability to fighting to its death. It felt like the Lord of the Rings meets Game of Thrones and I could of sworn the Elves were going to show up any second to fight the Orcs/White Walkers.

The opening sequence gave you a brief description of the Great Wall and I found the writing to be incredibly small. We own a very large television and I have no idea why they continually do introductions like this with tiny writing. During the actual movie subtitles would appear and just as quickly disappear and there were times I missed what the person was saying as it goes by so fast. You are then introduced to Matt Damon and find out very quickly that he is the leader of his small group and really the movie is just him saving the day in a spectacular fashion - with a very badly put on, at times, Irish accent that would completely disappear for several scenes and then reappear.

The action sequence were amazing to watch. It was beautifully filmed, even if at times it was terribly done. The Floating Lanterns took my breath away and looked so amazing during the funeral scene. The costumes were extremely impressive and like I stated before I was sure they were the Elves from The Lord of the Rings. I enjoyed the beautifully choreographed fight scenes especially the bungee ladies as they leapt off platforms and tried to stab the Tao Tei and there weird eyes. It was worth watching just for these scenes alone. It kept your attention even if it lost all credibility as the movie progressed.

The DVD gives you deleted scenes, The Weapons of War (which are very cool), Man vrs Warrior, The Great Wall visual Effects and some others. I was disappointed to see that the Great Wall was completely exaggerated and basically everything is a fabrication of truth.

Where as I did enjoy the movie and just took it for the legend it is, I was a tad disappointed I didn't get to see more of China. Visiting the capital city was great as I love seeing the Temples. The fight scenes were fantastic and the acting was passable. Its really not a bad movie if you understand that it is all lies which is a pity as the China in this movie is pretty spectacular.

The Great Wall stars Matt Damon, and is yet another example of whitewashing in Hollywood films. It was one of my biggest takeaways from the film, though only one of many aspects of the film and plot that I struggled to come to terms with. Matt Damon and Pedro Pascal portray William and Tovar, two westerners that lack honour and creed, and in search of a myth, discover entirely new eastern legends that they inexplicably are the only ones capable of providing solutions for. That, in itself was quite a sin. To provide a backstory that dates back over 1700 years from the time period of the film, that has the Chinese soldiers successfully doing a task until hours after the Europeans arrive just reeks of lazy writing; an obvious attempt to make western audiences empathize with it purely because of the Caucasian ethnicity of the actors involved. Personally, I would have preferred an entirely eastern cast.

The film includes a lot of CGI, and sadly the budget of the film wasn't quite enough. Many of the environments come of unrealistic and grainy, and the threats in the film are immense in quantity, size, and strength. The speed of movement, numbers, and the overall ferocity of the threats in the film make it very hard to get truly invested in the film; the odds are insurmountable, and there is no real subtle hints or subtext. You notice things and people that will be relevant later in the plot, but there is no way that the viewer has any chance of figuring it out. It all has to be spelled out with narratives and storytelling. So you just sit back and watch the carnage, waiting for the next step.

That being said, as an action film, there are many parts that I enjoyed. The defense mechanisms set up in the wall were a great touch; sieges have been pretty over done in film battles, so there were some nice original designs and adaptations to existing ideas, that kept up the excitement. While many of the differing coloured Chinese squads helped to differentiate between tasks easily, you couldn't help but laugh at the lack of realism at most of the ideas (specifically the acrobatic specialist Crane troop).

There were several points in the film that managed to illicit a laugh from the audience, generally Pedro Pascal being the source. As well as laughs, the film managed to fit in a few scares, which maintained their shock value regardless of the predictability of the actions. Despite the mix of action, theatrics, laughs, and shocks, the film laboured towards the end; the European mercenary subplot, really halting the plot progression.

There was a lot of potential with the film. I loved the Chinese fighting styles, and the cultural aspects used in the film. I would have preferred a much more manageable threat however, as there really was no reason why the monsters wouldn't win in the first wave. I really wanted to see these differing Chinese units fighting a proper battle, rather than each colour having a single method of attack. The European stars had better action scenes, better choreography and a variety of fighting styles. With a more manageable threat, perhaps greater attention could have been taken with the CGI.

A film that would be fun to watch, but not a film I would want to think about. Simply two teams fighting with as many explosions added as possible. The Great Wall? Not quite. It was a reasonable wall.

Every man's dream comes true for William Thacker, a successless Notting Hill bookstore owner, when Anna Scott, the world's most beautiful woman and best-liked actress, enters his shop. A little later, he still can't believe it himself, William runs into her again - this time spilling orange juice over her.

Anna accepts his offer to change in his nearby apartment, and thanks him with a kiss, which seems to surprise her ... more...