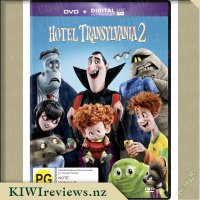 Everything seems to be changing for the better at Hotel Transylvaniaâ¦ Dracula's rigid monster-only hotel policy has finally relaxed, opening up its doors to human guests. But behind closed coffins, Drac is worried that his adorable half-human, half-vampire grandson, Dennis, isn't showing signs of being a vampire. So while Mavis is busy visiting her human in-laws with Johnny â" and in for a major cultural shock of her own â" âśVampaâť Drac enlists his friends Frank, Murray, Wayne and Griffin to put Dennis through a âśmonster-in-trainingâť boot camp. But little do they know that Drac's grumpy and very old, old, old school dad Vlad is about to pay a family visit to the hotel. And when Vlad finds out that his great-grandson is not a pure blood â" and humans are now welcome at Hotel Transylvania â" things are going to get batty!

I hadn't enjoyed the first film in this series a huge amount but the kids were keen to watch this sequel and so we did eventually sit down to watch this film.

It takes off not too long after the events of the first film, but speeds through Mavis and Johnathon getting married, having a baby and some of the highlights till just before their son, Dennis, turns five. We then skip between Mavis's desire to ensure her son is happy as he is, and gets a "normal" life and Dracula wanting to have his grandson become a vampire before his birthday (otherwise it will be too late). While I liked that we got the glimpse into the five years or so between the films, it didn't feel like it flowed well, so I wasn't really excited about what was to come.

Plot wise, it had its moments but plenty of flops as well. We are informed that Draculas father should, under no circumstance, be made aware of the human half of this new family, but given the huge threat of this, it ended up feeling so minor and rushed because he wasn't in the film much at all. Also, I felt that most of the plot involving just Mavis and Johnathon didn't really mesh up with their characters in the first film, but Dracula and his monsters with their plot was lots of fun and certainly the best parts of the movie. I felt this film could have had a lot of potential but in the end it just didn't live up to it.

I may watch this again, the kids had a blast, but I won't rush to watch it again.

When Larry Daley (Stiller) is hired as a museum night watchman he soon discovers that all the exhibits come to life after the sun sets. Suddenly, Larry finds himself fact-to-face with a frisky T. Rex skeleton, tiny armies of Romans and cowboys and a mischievous monkey who taunts him to the breaking point.

But he may just figure out a way to control the chaos and become a hero in his son's eyes. Boasting jaw dropping special ... more...