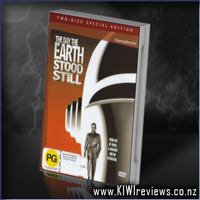 A spacecraft lands in Washington D.C. and an alien emerges, flanked by a menacing robot with destructive capabilities far beyond anyone's imagination. So begins the science-fiction thriller The Day The Earth Stood Still, a classic "atomic movie" from the 50's that would go on to inspire alien-invasion films for decades to come.

Rebuffed in his efforts to meet the world's leaders and warn them of Earth's impending doom, the alien, Klaatu, takes to the streets. Klaatu's plea for peace is embraced by a pretty, young woman and an eminent scientist, but the rest of humanity reacts with mistrust, fear, and violence. With time running out, Klaatu is forced to demonstrate his awesome powers in a mind-boggling display, teaching all of mankind a lesson for ages.

Special Features:
•  Audio Commentary By Robert Wise and Nicholas Meyer
•  A Warning And An Ultimatum
•  Making The Earth Stand Still
•  Restoration Comparison
•  Movietone News Of the Premiere and Events of 1951
•  Still Galleries

I first saw this film back in the early eighties (I think) and I loved it. Since then I have been trying to locate this classic in one form or another without any success.... Until now. This film left a huge impression upon me, in fact it was almost as big an impression as 'Star Wars' made.

This film is the epitomy of the classic 50's "atomic movie" genre. I personally love this and another "atomic movie" classic, "Dr Strangelove (Or how I learned to stop worrying and love the bomb)". Whilst they are obviously two completely different styles, they both manage to accurately convey their message on the threat of M.A.D. (Mutually Assured Destruction - rather apt acronym huh?) that existed at that time. Whilst the 'Cold War' is over and the Soviet Union is no more, the Nuclear & Weapons of Mass Destruction threat is as equally valid today as it was 50 odd years ago. I feel the message from this movie is just as valid today as it was then.

Whist the special effects in this film are nowhere near as good as they are today, for the 50's they were quite amazing. In fact, some of the techniques they used back then for the effects are still in use today.

I just had to give the Believeability a 10 rating as the way they portrayed they military & media's reaction to Klaatu's arrival & subsequent disappearance was just spot on for the era, and possibly even today.

Oh and the extra's on the DVD are quite interesting as well.

The Age of Wonders is about to begin!

Before she was Wonder Woman she was Diana, princess of the Amazons, trained warrior. When a pilot crashes and tells of conflict in the outside world, she leaves home to fight a war to end all wars, discovering her full powers and true destiny.

An Amazon princess (Gal Gadot) finds her idyllic life on an island occupied only by female warriors interrupted when a pilot (Chris Pine) ... more...