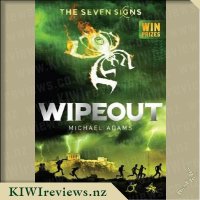 Disclosure StatementFULL DISCLOSURE: A number of units of this product have, at some time, been supplied to KIWIreviews by the company for the purposes of unbiased, independent reviews. No fee was accepted by KIWIreviews or the reviewers themselves - these are genuine, unpaid consumer reviews.
Available:
February 2017

After Andy and Dylan are caught in a fiery explosion, Zander, Yasmin, JJ, Isabel and Mila realise their only chance to stop the next attack is to get one step ahead of The Signmaker.

But the evil mastermind is far from their only problem, with the DARE winners now on the run from police, government agents and sinister suited thugs.

Nowhere is safe. No-one can be trusted.

Can they stay free long enough to decode the Third Sign, stop the next attack and reveal The Signmaker's true identity?

If you could be a hero, would you DARE?

Seven Signs. Five days left to save the world.

The Amazing Spider-Man vs The Lizard
Rating: 9.5

I was glad that I got Books 2 and 3 in this series at the same time so that I could read the third volume while the events of the second ("Carnage") were still fresh in my mind. It makes a huge difference having that continuity, and reinforces my impression that having too long a gap before the release of each new instalment does not work very well. Now that I know there is going to be a cliff-hanger at the end of each one, I am resigned to wondering what the author has in store for the reader next time round.

Having said that, I was interested to see that there was a typo on the very first page (the recap of the events of "Carnage") whereas the first two books could not be faulted, so I wonder if this was an indication that the publication deadline had been brought forward so that the interval between releases had been too tight to allow for comprehensive proof reading. It is a minor point but I notice things like that! There was also an instance of a phrase being repeated towards the end of the book - again, not something I had picked up in previous books where the style had been of a consistently high standard.

The book itself is a good, fast paced read. I was pleased that the seven characters were finally united in the same place for part of the narrative as it made them appear more believable. The online communications were all very well but it meant that up to this point some of the characters had been somewhat two-dimensional.

One of the aspects of this book (and indeed the whole series) that really appeals to me is the way the seven friends unpack words and symbols, testing out different combinations until they have found a solution that fits. For the most part, these anagrams and hieroglyphs follow a logical system which makes sense once it is explained, and the book is self-contained in this respect. There is, however, a single reference to Avarava which makes no sense whatsoever if you have not previously read "Carnage"!

I can see this series being made into a TV series, and with weekly instalments it would be workable. There is probably far too much action for it to be able to fit into a single movie; in fact, it can make the reader quite exhausted just keeping up with the constant life-threatening situations and the regular elimination of secondary characters. But that is what escapist literature is all about!

This is an interesting series. With a number of terrorist attacks, the toll that they take seems to accelerate with every subsequent attack. The scale of these events are already so large, however, that just finding out what the next attack is going to be, is as intriguing as the protagonists attempts to decode the signs to stop it. I almost want to see the main characters fail just to see how the plan falls into place.

The story is rather easy to follow. As with the previous books, the story is split into many small chapters that make it very easy to read. Each chapter comes from the point of view of a certain group/person as often the characters will split up due to the "time constraints" set up in the book. As opposed to the previous installments, we find the story is a lot easier to follow as the protagonists are together for most of this book, removing the switching between characters and story lines that we usually have (or they split into larger groups, in which case the number of running plot lines is still drastically reduced, so much less to keep track of).

It is interesting to see the mounting number of obstacles that the characters are coming up against. And it, is adding layers of complexity to a story line that would otherwise come across as very simple. This is a premise that I am really enjoying, and imagine would work really well as a movie series if it was...more R-rated. With no serious risks to the DARE winners, its slightly harder to take it all seriously. But there are many other aspects and complexity that make up for this and provide a compelling story to follow.

Being provided the signs, and listening to how they are deciphered is a fun way to encourage lateral thinking on the viewers behalf, and encourages problem solving in creative ways. I look forward to seeing how this all ends.

In this exciting and action-packed adventure by an award-winning author, a young girl discovers her secret ancient bloodline. The fate of her family, and the world, may rest in her hands...

Cassie Arroyo, an American studying in Rome, has her world ripped apart when someone tries to kill her father, an art history professor at an Italian university. Is she their next target?

Cassie sets out to uncover what is happening, ... more...