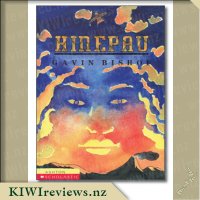 Disclosure StatementFULL DISCLOSURE: A number of units of this product have, at some time, been supplied to KIWIreviews by the company for the purposes of unbiased, independent reviews. No fee was accepted by KIWIreviews or the reviewers themselves - these are genuine, unpaid consumer reviews.
Available:
tbc

Hinepau has hair the colour of a sunset and eyes the colour of greenstone. The people in her village are frightened by her startling appearance. Even her weaving is different, all back to front and inside out. The people banish Hinepau from the village, but when disaster comes and the great volcano grows angry, it is to Hinepau, the outcast, they turn.

Things In The Sea Are Touching Me!
Rating: 9.4

I remember spending hours reading the few Maori mythology stories that my mum had as part of her big book collection, so when I saw this available I knew I had to request it as by all appearances this looked like it would be a good addition to my personal library. I enjoy reading books that are based around different cultures beliefs and mythologies and even better is one that represents my own country. The kids saw this come out of my box of goodies and were immediately requesting that I read it to them, preoccupied with not burning dinner I wasn't able to but that didn't stop them from looking at it over and over.


One thing that I love about this story is that there are plenty of Maori words throughout the book but there are just part of the story. Each one, when first used has a translation at the bottom of its page, making it a good little addition and if you don't know the word, eases away any confusion. I didn't bother with translating the words for my kids, I knew if they were curious that they would ask me, but it is good to have the translations there for them in the future. The one thing I would have liked would have been just a page at the back with each of the words and how to pronounce them (I did know how to pronounce most of them but a couple I did not).


My kids thoroughly enjoyed this book and have asked me to reread it to them several times, a lovely story with lovely illustrations. This is a book which is, quite simply, a work of art in itself. The graphics are stunning: when I put a selection of books on the table, all five children went for this one. Mr Seven, Miss Five, Tuakana and Teina were all more than ready to settle to listen to a story. Even Miss Eight Months, who is barely able to understand what a book is, was taken with the pictures and wanted to see.

Mr Seven had a quick look at the book and said he would like to read it to the others if we (the two adults present) gave him a hand with some of the harder words. That was fine by us; it was nice to see that he was keen to read, and the other children settled around him to listen. There is something very special in watching a child read to younger children: there is this bond that happens as the little ones get drawn into the story, and, despite the occasional request for assistance, he was so caught up in the story himself that it really did not matter.

Tuakana loved the colours and every so often she reached over Mr Seven's shoulder to pat the pictures. Teina was content to look on and just listen to the story. Miss Five sat at her brother's feet but each time he turned a page she popped up to see the new picture. Mr Seven was careful to read slowly so that the little ones could follow.

Because the story is about weaving and the magic you can create through this mahi, Miss Five was really into it because she has just started to learn to weave herself so there was a special connection for her. We had to explain what a makutu meant, and assure her that weavers do not really do that! Later in the story, when Hinepau went for a ride on the back of the ruru, we had to chime in again and tell her that she would not be able to do that either.

I love the way that the Maori terms are used as an integral part of the story. All the children have some reo and were able to follow on with a little help from us. Mr Seven in particular knew some of the words but others were new to him, so we explained them in context as we went along. He was quite proud of himself by the time he got to the end as he had learned a few new words and was confident in his pronunciation. It is a great way to help children to learn as they go. I left the book with Tuakana and Teina, and as I left I heard them asking their mother if she would read it to them again. Children are the best critics of all. If they like a book, they say it how it is - loud and clear!

"Tree, what day is it today?" asks Grasshopper.' So begins his discovery of the days of the week in an exciting new way. His wise old friend Tree reveals each day to Grasshopper as a unique and wonder-filled experience. They are joined by a host of lovable visitors who crash, snore, wiggle and sing their way into Grasshopper's week. The characters are based on New Zealand native wildlife, adding another level of interest to the ... more...