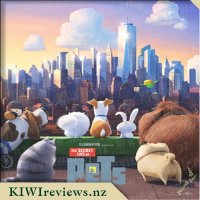 Max (Louis C.K.) is a spoiled terrier who enjoys a comfortable life in a New York building until his owner adopts Duke, a giant and unruly canine. During their walk outside, they encounter a group of ferocious alley cats and wind up in a truck that's bound for the pound. Luckily, a rebellious bunny named Snowball swoops in to save the doggy duo from captivity. In exchange, Snowball demands that Max and Duke join his gang of abandoned pets on a mission against the humans who've done them wrong.

My kids and I saw the trailer for The Secret Life of Pets multiple times and it had us hooked on wanting to see it. I love having pets and the kid I was loved to imagine what they might get up to when I wasn't there, so I loved the idea of this film. I was dissapointed that the entire trailer was in the film, it felt like it didn't need it and due to seeing the trailer many times, it just wasn't as fun. I love how Max is, totally reminded me of a dog I used to have and I loved how the introduction of a new dog in his life upset his balance, pretty much how you'd expect it could.

I love the storyline with Max and Duke, how first they don't get along but along the way there is hyjinks, fights, personal growth and eventually friendship. What I didn't really like was the sewer scenes with Snowball, Max and Duke and overall I didn't like Snowball much at all (he felt too gangster to me). I do like how all the animals have their various personalities and quirks and also that they act how you'd expect the real deal to act ie. Gidget is such a jumpy, bouncy dog.

My three kids enjoyed this film far more than I did, I'm not fussed about watching it again but all three of my kids are not only keen on seeing it again but want us to get it on dvd. I feel like this missed a lot of its potential but at least it was worth it for the kids.

Would I lie to you?

Fletcher Reede is a fast-talking attorney and habitual liar. When his son Max blows out the candle on his birthday cake, he has just one wish - that his dad will stop lying for 24 hours. When Max's wish miraculously comes true, Fletcher discovers that his biggest asset - his mouth - has suddenly become his biggest liability! Hilarious havoc ensues as Fletcher tries to keep his practice afloat and his ex-wife Audrey from taking their son and moving to Boston.