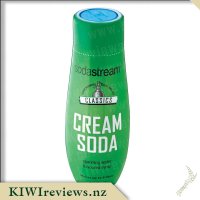 Disclosure StatementFULL DISCLOSURE: A number of units of this product have, at some time, been supplied to KIWIreviews by the company for the purposes of unbiased, independent reviews. No fee was accepted by KIWIreviews or the reviewers themselves - these are genuine, unpaid consumer reviews.
Available:
At selected quality retailers

Oh my goodness - SodaStream I love you! I have always been a fan of my SodaStream machine, but hadn't used it for some time when I received this Cream Soda flavouring as part of my 12 Days of KIWImas prize I won on day one. It was time to finally dig out the SodaStream machine and hope that it still had gas in the cylinder. I was in luck, there was definitely gas and it wasn't long before I had a bottle of fizzy water in front of me, waiting for me to add the flavour in.

When I purchased my machine I also purchased two of the small single serve bottles so that when I make a SodaStream drink I can make just enough to drink and not have to store anything left over. This does mean that the handy syrup measuring cap isn't overly useful for me, as my bottles are much smaller. I do however use the little line on the bottle to gauge just how much I am pouring in. With this particular flavour I found it too weak when it got to the syrup line, so I put a little bit more in, tasted it, little bit more, tasted it and carried on until it tasted just right. I'm not sure whether this is because it is a flavour I like to be stronger, or because it is a slightly weaker syrup that does need some more.

Living in New Zealand I am used to my creaming soda being yellow. The Budget brand being the most common ice cream soda flavour that seems to be readily available. Having spent a couple of years in Australia though I soon came to know that creaming soda could also be red, or less commonly green. For this I wasn't surprised when I discovered that the SodaStream syrup was green, but it did make me wonder if I would like it that much as I never really enjoyed the creaming soda flavours in Australia. There certainly was no need to be worried. With the first sip I was in love! SodaStream have hit the nail on the head with this flavour. I don't even know how to explain it, except that it is the most perfect ice cream soda flavour I could have imagined! If you are a fan of creaming soda, I highly recommend trying this one.

Coca-Cola cherry with zero sugar is the perfect drink for people who want the great Coke taste with a fruity twist, as well as zero sugar and zero calories.