« Dancing with Cranes: On location with a New Zealand wildlife film-maker review 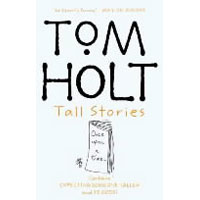 Disclosure StatementFULL DISCLOSURE: A number of units of this product have, at some time, been supplied to KIWIreviews by the company for the purposes of unbiased, independent reviews. No fee was accepted by KIWIreviews or the reviewers themselves - these are genuine, unpaid consumer reviews.
Available:
Whitcoulls

EXPECTING SOMEONE TALLER - All he did was run over a badger - sad, but hardly catastrophic. But it wasn't Malcolm Fisher's day, for the badger turned out to be none other than Ingolf, last of the Giants. With his dying breath, he reluctantly handed to Malcolm two Gifts of Power, and made him ruler of the world. But can Malcolm cope with the responsibility? YE GODS! - Being a Hero bothers Jason Derry. It's easy to get maladjusted when your mum's a suburban housewife and your dad's the Supreme Being. It can be a real drag slaying fabulous monsters and retrieving golden fleeces from fire-spitting dragons, and then having to tidy your room before your mum'll let you watch Star Trek. But it's not the relentless tedium of imperishable glory that finally brings Jason to the end of his rope; it's something so funny that it's got to be taken seriously. Deadly seriously ...

Birthdays for the Dead
Rating: 9.8

Keeper of the Crystals 1: Eve and the Runaway Unicorn
Rating: 9.6

These fantasy/comedy novels reminded me so much of the Hitchhiker's Guide to the Galaxy novel crossed with a Monty Python film, and the lead character reminded me of Neil Morrissey (Men Behaving Badly). The only problem was it was not quite as good as all of the above and was a bit long and drawn out in places. I found it almost as good though, so well worth reading, especially if you like novels by Terry Pratchett and especially Douglas Adams. E.g.:

"In fact, as they will be delighted to tell you,
Taunton is no longer a one-horse town; these days,
they have a bicycle as well."

"It was irritating to have one's physical shortcomings pointed out quite so plainly twice in one evening, once by a beautiful girl and once by a dying badger."

Tall Stories is Tom Holt's fifth omnibus and contains two novels, Expecting Someone Taller and Ye Gods! This volume of the book is also sold with another novel, The Portable Door, so is a great Tom Holt treat and excellent value.

This stunning book is a photographic and personal journey through New Zealand. Starting in the far north, Kieran Scott's photographs are grouped regionally and move south through the country, taking the reader on a trip that showcases New Zealand's endless variety.

The visual journey includes both black-and-white and colour images and a mixture of landscape, portrait, still-life, urban scenes and interiors. The entire country is ... more...