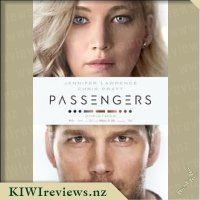 On a routine journey through space to a new home, two passengers, sleeping in suspended animation, are awakened 90 years too early when their ship malfunctions. As Jim and Aurora face living the rest of their lives on board, with every luxury they could ever ask for, they begin to fall for each other, unable to deny their intense attraction until they discover the ship is in grave danger. With the lives of 5,000 sleeping passengers at stake, only Jim and Aurora can save them all. Visually, this movie was amazing. The environments were breathtaking and a thrill to watch on the big screen. You just get taken in by the emptiness of space and it really helps you engage with the main character Jim (despite travelling through space being a difficult thing to empathise with). The writers have done a brilliant job in creating the premise, and finding legitimate ways to justify it. Every thing you think of that could avoid the problems that the protagonist comes across, is covered. There is a reason why it is that way. They cover pretty much all their bases...almost too well.

I suppose one of things that I was able to understand was Jim's perspective of isolation and loneliness. It made me seriously consider the ethical implications put forward by the film; if you strand a man on an island, and he could strand another person with him, would you doom that person to a life stranded for the sake of companionship? With the possibility living the rest of your life completely alone, it is a difficult decision that one would have to wrestle with every single day. Contemplating the conundrum myself, I thought of a dark solution to the problem of living alone for 90 years, and it really hit home when I saw Pratt go through the same motions. It really made me connect with his character, as he truly considered every possibility.

And that is one of that other well done things about the film. The majority of the film is shot with only 3 members of cast. An amazing feat to get so much emotion and development with such a minimal cast. The use of a cyborg character with limited functions in the film is a great workaround when you have such minimal cast, allowing the sense of being alone, but still providing good banter, comedic fills, and providing the protagonist with a sounding board so that he doesn't instantly come off as a crazy man talking to himself.

The one part of the film that I took exception to was how the film turned plot-wise. The second half of the film changed from a thought-provoking ethical dilemma, and it was turned into an all out action film that rendered the previous ethical dilemma moot. Once it went full action, the cracks in the plot started to show through, and I started to disconnect from the characters. I was entertained, but it was predictable and not really a surprise at all.

There are so many small things that bring levity to the film, whether it be the "class" of passengers, sending emails through space, communicating with robots, or the things people do when alone. But ultimately it falls short of a great film; the drastic change in focus between the two halves of the film, and the negating effects of one on the other, ends up ruining all of the credibility that it creates.

Beca (Anna Kendrick) is that girl who'd rather listen to what's coming out of her headphones than what's coming out of you. Arriving at her new college, she finds herself not right for any clique but somehow is muscled into one that she never would have picked on her own: alongside mean girls, sweet girls and weird girls whose only thing in common is how good they sound when they sing together acapella.