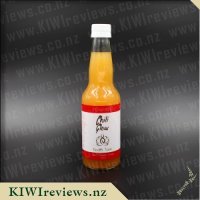 A great asset for the athlete. Use both pre and post workouts, and for endurance events. You will be energized and illuminated!

Ok WOW this is seriously flavoursome brew! I love the taste of tangy apple cider vinegar, honey and ginger to make me kickstart my day or my workout. It is an intense flavour which you wouldn't pour yourself a large glass of but instead a small taste or dilute with water to get the same results.

Chili Glow Health Tonic assists with hormonal balance and apparently boosts the libido - which made hubby very happy to have a few glasses of!! I loved that it seemed to give me energy before and after a big workout. This is an energetic drink that not all palates will love but those that do will not be able to settle for anything less .

I would recommend this to my friends and family that have similar tastes to myself along with a great mate who runs and manages ultra-marathons - something to give a swift kick to the endurance is always welcome when we are trying to achieve our desires and goals. Great that this is in a recyclable bottle and I love the image - yoga calm and red heat intensity is certainly a combination I can endorse! Well done Lifeforce Tonics, I can't wait to try your other flavours of the Granite Health Tonic brand!

If you like apple cider vinegar, you should like this. Read the instructions BEFORE you pour yourself a drink, unlike me who poured a big glass. I like the label with the red writing on the white background, it does confuse me when it states 7.5 adult serves per bottle but the adult daily minimum is 100mls from a 330ml bottle. I also didn't see anywhere on the label that said anything about recycling it even though this should be common sense. There is a lot of sediment at the bottom of the bottle so I suggest you gently invert it before drinking. The bottle is glass which fits nicely in your hand.

I struggled to get this near my mouth, the smell is terrible although I believe I can smell a hint of honey. After being finished five minutes ago, I still have a warm feeling in the roof of my mouth which is not unpleasant. It tastes rather funky and I don't like the apple cider vinegar taste but the ginger really cuts through and well as the cayenne. I like the fact the ingredients are organic and guess the shorter expiry is because it is so good for you.

I am trying all sorts of things at the moment to improve my health increase energy levels and help with my bodies digestive problems. I am finding myself intolerant to gluten and lactose and have been using raw apple cider vinegar in water twice a day which has a very overpowering taste that you have to quickly wash down with something nicer tasting so I thought this life force tonic would be a good alternative.

I have heard great things about the benefits of chilli to your body but as I am not big on the heat factor tend to stray away from things that are too hot. I loved the ingredients as I do use a lot of honey to sweeten as I am quite reactive to processed sugars and love how ginger really helps reduce my nausea in the morning. I do have poor circulation so the idea of increasing circulation was great sounding. Ii wake up very cold and am very cold at night even when the weather is very mild.

When I opened the bottle it smelt very pleasant I couldn't pick up on any chilli it smelt more like a lemony drink to me so I was quite excited to try. I took a small tentative sip and loved the taste so went back for a big swig it wasn't until after this that the burn set in. I felt like I had heartburn with the chilli going down my esophagus so I wasn't sure if I enjoyed it or not. It took me a while to go back and try the rest of the bottle just to make sure and like I said while I enjoy the taste and find it very warming I did get a bit of a burn and a sweat on.

Maybe then my circulation was improved as I certainly didn't feel cold after drinking it!! I am not sure on energy levels as spices often irritate my tummy which makes me feel fatigued so I did crash mid day to just give my tummy a little chance to settle. I am slowly learning things that irritate my stomach and things that don't so it is good to try things out and see if it does help and I love trying things with natural ingredients as I am trying to cut out processed foods from my diet.

I am not sure at this stage if I would try it again maybe when my stomach is not so sensitive to spice but would love to try some of the others that perhaps don't have the addition of chilli as I do find honey, apple cider vinegar and ginger on their own to be very soothing in the morning! This is the third in the range that I have tried, and this one is seriously hot - for me, on the borderline of almost too hot! I sipped the first few drops very carefully before trying it properly - I like spice, but there is a limit! I was unsure while I was drinking it as to whether or not I liked it, but the after effect was positive. I had a tingling in my mouth and throat which left me wide awake and ready to go. Since it was 4.30 am and I was about to drive 200 km in order to get back home after a weekend away and make it to work on time, this renewed alertness was a bonus.

It was a cool morning, the sort you often get in late summer and early autumn when the days are unbearably hot and muggy but the early hours of the morning bring welcome relief. I was actually quite cold when I got into my car to start the drive, and immediately noticed that I was starting to warm up as my system responded to the chili drink. I like the way that this particular spice causes this after effect. It is warming in cold weather but cools you down by making you sweat when the weather starts to get warmer. This makes it a perfect hot-weather addition to meals as well as being a key ingredient in a beverage.

As far as flavour is concerned, I found there was a bit of a clash between the sourness of the cider vinegar and the heat of the cayenne chili. I think I would prefer slightly less cider vinegar to give more of a balance. It was almost as though the sour were competing for notice and the result was that the taste was overpowering. Rather than add sugar to counteract this, I would prefer the proportion of vinegar to the other ingredients to be reduced slightly.

I finished the last of the bottle a couple of days later with some sushi. I took it to work to have for lunch and as I had transported it in its original bottle I found there were quite a few comments from my work colleagues. They admired the bottle with its decorative scarlet bands and one person asked if he could taste it. Unfortunately I had been drinking it straight from the bottle as it was the last day of the "trial" so I had to refuse - but I suggested he go and get his own bottle to try. Like me, he likes spicy food so was intrigued by the idea of a chili drink.

I am not sure how illuminated I was after finishing the bottle, but I certainly experienced the wake-up effect and the feeling of general wellbeing it caused. Next time I buy it I am going to try a little with a pasta dish as an aperitif. From what I have tasted so far, I think this will be an interesting combination. Much like the 'Ginger Zing' variety of Lifeforce Tonic, the 'Chili Glow' has very subtle scent, but a rather pungent flavour. The cider vinegar is clearly the dominant flavour providing a sweet but overwhelmingly sharp taste that quickly subsides. Interestingly, this beverage is almost exactly the same as the Ginger Zing related to ingredients, the only differences being the addition of Cayenne Pepper (0.2%), and a reduction of Honey (from 4.6%, down by almost 3/4 to 1.3%).

The cayenne does leave a lingering warmth after you have consumed it which would be nice in the winter, being both refreshing an warming. The cayenne pepper does also seem to reduce the tartness of the apple cider vinegar which I prefer. For children under fiver years of age, it is recommended that you diluted 50mL with equal amounts of water, and I do prefer it diluted myself. There is little change in the chili flavour when diluted, but the vinegar is much more palatable when watered down.

I feel that the dominant vinegar flavour needs to be represented better on the labelling and packaging. With names like 'Chili Glow' and 'Ginger Zing', I would expect chili and ginger to be the primary flavours, but they merely represent the subtle lingering aftertaste. Again, this is unfortunately not my cup of tea. Diluted with some additional honey I would enjoy it much more, but compared to other drinks it is like sucking on a lemon when I much prefer an orange. Still good for you, but too tart for my taste buds.

Established in 2000 in the Nukuhou North Valley, 30km south of Whakatane in the Eastern Bay of Plenty, this boutique winery is driven by a passion for making fruit wines.

Enjoy the wine early for it's finest character.