« The Journey: How I Cheated Death And Cured My Diabetes In 21 Days review 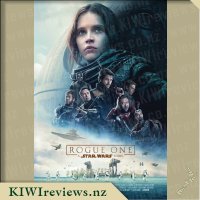 Disclosure StatementFULL DISCLOSURE: A number of units of this product have, at some time, been supplied to KIWIreviews by the company for the purposes of unbiased, independent reviews. No fee was accepted by KIWIreviews or the reviewers themselves - these are genuine, unpaid consumer reviews.
Available:
in cinemas from December 15th 2016

In a time of conflict, a group of unlikely heroes band together on a mission to steal the plans to the Death Star, the Empire's ultimate weapon of destruction. This key event in the Star Wars timeline brings together ordinary people who choose to do extraordinary things, and in doing so, become part of something greater than themselves. This installment marks Disney's second attempt at the Star Wars franchise, and "The Force Awakens" although initially was accosted with overwhelmingly positive reviews, that stance soon changed once the novelty of 'a new chapter' passed and the viewers realised that beyond better graphics and inclusion, there was little to the film. So Rogue One is another attempt that will try and glean an original story from the existing universe without creating too many comparable moments to the previous 7 films.

Rogue One takes place between the 3rd and 4th films (chronologically speaking. So just before the first film of the original trilogy) and bases it's entire plot around a single scene from the original trilogy where the Rebel Alliance get their hands on the schematics of the Deathstar. Watching the film, it eventually became very obvious how little actual content there was too the plot. There were unfortunately several moments where I had audibly sighed as I noticed time starting to drag.

But let's start at the ends. There is no yellow title plot scrawl flying through space. This is the first film in the Star Wars franchise to have ditched this aspect, and really it had no impact on the film (really, it's a spinoff film, with generally characters unrelated to the main story arc so what would it even say?). So it jumps straight into action introducing characters vital to the Rogue One storyline, introducing both protagonist and antagonist. (While we are talking about the ends I'll also mention that there are no mid or end credits scenes, so you don't need to sit through the credits).

One of the things that has always appealed to me about the Star Wars movies is their use of generally unknown actors and actresses, as it helps me to properly immerse myself in the story, as I have no conflicting memories of the actor or actress portraying a different character. So I was apprehensive about the inclusion of Forrest Whitaker into the cast. In the end, I found he was rather a throw away character that had little effect on the plot, and was really rather unnecessary. The casting choices were rather eclectic, and felt like Disney was again trying to gain points for inclusion by creating a team of mismatched ethnicities and genders, which almost gave the Rogue ONE team a feel similar to "Suicide Squad" (there's the good shot, there's the sparky one, there the brawler...etc.). It just never felt fully cohesive to me.

The protagonist herself (who could hands down win a 'Friends' lookalike competition if she went as Monica a.k.a Courtney Cox-Arquette) was a reasonably fun character to follow. She kept the energy up through out the film, and pushed on when things were starting to slow down. She did have a similar feel to her character that Rey had in "The Force Awakens" where she went from no knowledge, to being the most qualified person by the day of the film. But the real star of the show would be Alan Tudyk's voicing of the hacked empire Droid. He provided a brilliant comedic value to film, and finally gave us a Droid that could properly fight and contribute to a war, rather than the smaller tin can or lanky shuffling metal stands.

The action was there, and the choreography of the fighting was well done. I enjoyed it, and it stands up well on the entertainment scale. But the camerawork does make the movie a little difficult to watch. As a warning, there will be many shots where people are standing out of focus, but taking up a large part of the screen. Much time is spent staring at out of focus environments, then focusing on the one small thing in every centre. It all becomes a little bit hard on the eyes (especially in 3D).

Overall, how did I feel about the film? Well I enjoyed it. It provided entertainment, but it suffered by providing a story that I already knew the ending to. Even the final ending I knew was pretty likely to happen. It suffered from trying to create a team of expendable characters and trying to make us love them. It will entertain you, and and has plenty of cameos from past characters (and some amazing fully CGI characters), but this will appeal mainly to those that want to complete their movie collections, rather than on the merits of the film itself. Not much in the way of plot, and many plot holes. It doesn't feel like a waste of time watching it, but I don't feel that I have gained anything from it.

This re-imagining of the popular 60s TV sitcom, Bewitched gives it a magical twist.

Jack Wyatt (Will Ferrell) is a difficult Hollywood star who is trying to make a comeback by playing Darrin Stephens in a remake of the series. When Jack sees the beautiful Isabel Bigelow (Nicole Kidman), he thinks that she'd be right for the part of ... more...