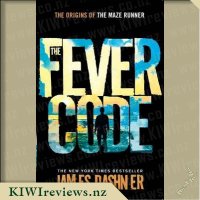 A prequel to the worldwide Maze Runner phenomenon, The Fever Code is the book that holds all the answers. How did WICKED find the Gladers? Who are Group B? And what side are Thomas and Teresa really on? Lies will be exposed. Secrets uncovered. Loyalties proven. You'll never see the truth coming...

The maze runner saga has been one that has always captivated me. After the original 3 books were published, I thought that was the end, and then after "Kill Order" I still thought it had all been covered. This book, however, is the missing piece of the story. I had often wondered about how Thomas and the other Gladers ended up in the maze, despite that topic being touched on several times in the first 3 books, I never knew the whole story.

The book had a bit of a slow start. Things seemed a little bit disjointed and confusing, but then again, I'll bet that's precisely what the characters were feeling at the time. Despite this slow start, I soon became captivated by the story and began to speed through it. The post-apocalyptic world that this series has created is quite stunning, however this book doesn't talk much about it. That's something that makes this book rather different from the others, is that this one almost entirely takes place within the W.I.C.K.E.D complex, instead of being in a desolate ruined city, or an ever-changing maze.

The story was quite interesting mostly because of the psychology behind it. W.I.C.K.E.D have taken a group of young children and put them through one simulated hell after another, all to gather test data in order to find a cure to an epidemic which has gripped the world and thrown it into chaos. Reading the thoughts and experiences of Thomas as he and the others were put through all of these ordeals, even before helping to build the maze and then being thrown into it, it put a very interesting perspective on everything I had read about in the other books.

With this book now read, the series has finally come full circle, but I have now learned to hold off from believing that the saga is over, so I will have to wait and see. For now, though, I think this has been an amazing book, and one I may very well read again. After all, since reading this book I decided to re-read "The Maze Runner", which has started me on the storyline once more, so I would say it is likely I will return to this book as well, in due time.

Overall, I would say that this is quite an immersive, captivating book, and one that I believe any Maze-Runner fan should read. Enjoy.

Finally I have received the answers that I have been searching for over this series. I have had such a love/hate relationship with the Maze Runner series. I watched the movie and hated it and found it so silly. Then I was given an opportunity to read The Scorch Trials hoping to get some answer, which sadly only asked more questions so I went back and read the first book, which I enjoyed slightly more than the movie. Having read the two books, I thought the third book Dead Cure would provide me with answers, and where as I did get some I was still left scratching my head. So I am now so thankful I can put this whole saga to sleep knowing why they did why they did and why Thomas had such a hate for Wicked which I could never understand.

Like the previous books it is very daunting to lift up and find there are 329 pages made up of 63 chapters and an Epilogue and a Prologue. Thankfully the pages can vary from two pages to about ten at the most so you find you fly thru the book in no time at all. It is a tad slow in places and drags on in other areas but it is still a very good read.

The real reasons behind the tests are finally revealed in a way that I actually understood. Also the truth(s) behind Wicked are finally revealed and you finally find out if Theresa is actually a good guy or a bad guy. Cranks are investigated more closely and secrets are finally revealed. All and all I am happy with the conclusion so much so I am considering reading the other three books again - as like stated before I have read them completely out of order previously. I must admit I have forgotten a lot of what I had read previously and although I knew what was going to happen some scenes were still a little hazy for me.

I did find it a little silly how all the main players from the Maze Runners were all friends in this book and would lunch together. Considering they would all hang out with Thomas and Theresa it does not make sense how they all reacted when they got there memories back in the Maze. I feel this book was written as an after thought and so parts of it just do not add up completely.

Still I am so glad I read it and got the answers I have been searching for can finally be put to bed. If you are like me never understood why they would torture these poor kids then this is the book for you. Still a silly concept and one I am afraid will never have a happily ever after.