Rose in the Blitz review 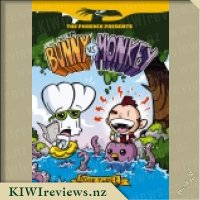 Bunny and Monkey have been fighting over The Woods with all sorts of crazy inventions, but now they will have to face a new threat to their woodland home - strange creatures called hew-mans, with great big diggers . . .

My eldest had loved the first two books in the Bunny vs Monkey series, so when he saw that we'd gotten book number three, he was most excited and has been bugging me since we got it, to keep it in his room with the rest of the series that he has so far. We follow the hyjinks of eight woodland creatures as the get into wacky situations, in some cases try to defeat each other, take over the woods or invent strange new contraptions. The pictures are full of life and colour and work well with both the written word, and on their own.

I, personally, enjoyed this book more than the first two books, not sure why as the humour is the same as previously, maybe it's where I currently am mood wise or emotionally..? Either way, I liked this better. I liked the puzzle at the end of the book, though my kids didn't enjoy it quite so much. My eldest thought this was a fabulous book and it's already in prized positioning on his bedside table. His favourite story is when Le Fox, Pig and a bear swap bodies, he came up with all sorts of body swapping combos as a result.

A fun addition to the series and perfect for bite sized readings. I am not sure which of us is the biggest fan of the Bunny vs Monkey series. Having read (and loved) the first two books in the series, Mr Six and I settled down to enjoy the third together. I don't know whether it is that the series has grown on me, or whether it is just my reaction to Mr Six's enjoyment, but I am finding I actually enjoy the offbeat humour and clever witticisms sprinkled throughout the books. We took turns reading aloud, stopping frequently to look at the illustrations.

All the animals are together again in this book - cute, sensible Bunny and naughty Monkey with all their other friends from The Wood. I liked the innovative way in which they appeared together on an Anti Gravity Device straight after the contents page. It was a useful way of reminding ourselves of the characters' names and what they looked like, and I can see this being a great way for older kids to "mind map" their characters when they are studying a novel at school. Graphics are a great memory aid and both Mr Six and I really liked this one. It is simple and colourful, and easy to read. Mr Six tried standing on his head so he could read the upside down bits, but I was happy just turning the page upside down!

The same wacky humour that we remembered from the last two in the series permeates this book. There is still a liberal helping of naughty words like "bum" and "poo", but nothing more extreme. Just enough to appeal to kids' very basic sense of humour. Mr Six thought the funniest part was where the big dead fish distracted Bunny and the others so that Monkey could graffiti "bum" all over his things. Bunny and his friends were not at all amused, but Monkey thought it was a hilarious joke and so did Mr Six.

I liked the puzzle at the end of the book - it is not too difficult but does provide a little extra challenge for a child with good spotting skills. I have to admit that Mr Six solved some of the searches long before I did, much to his delight, and he did not cheat at all. What was even worse was that he would not let me cheat either!

Graphic novels like this are a great way for kids to practise their reading. Slow or reluctant readers have the stimulus of the pictures to encourage them to persist with their words, and more advanced readers will read books of this type several times over as they are less time consuming that all-text stories. Now we have to curb our impatience till Book Four is published. I am sure it will be worth the wait.

A rare hybrid of vampire and werewolf, Riley Jenson and her twin brother, Rhoan, work for Melbourne's Directorate of Other Races, an organisation created to police the supernatural races - and protect humans from their depredations. While Rhoan is an exalted guardian, aka assassin, Riley is merely an office worker - until her brother goes missing on one of his missions. The timing couldn't be worse. More werewolf than vampire, Riley is ... more...