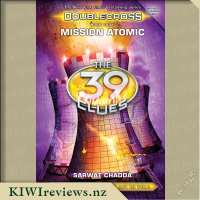 Thirteen-year-old Dan Cahill and his older sister, Amy, are running out of time. An exiled Cahill known as the Outcast has already recreated three of history's worst disasters, and he's saved the worst for last. If Dan and Amy can't find and stop the Outcast fast, he will initiate a full-scale nuclear meltdown.

But as Dan and Amy race around the world, they discover something horrifying. The Outcast's disasters are only a smokescreen to cover up his true plan, a diabolical revenge on the family that betrayed him. Soon Amy and Dan will have to confront a hard truth: sometimes the only way to save the world is to sacrifice everything you love.

The Ode Less Travelled - Unlocking the Poet Within.
Rating: 9.8

The Book of New Zealand Records and Firsts
Rating: 8.9

Prince of the Icemark
Rating: 8.5

One thing I absolutely hate is finishing the last book of a series! I find as the chapters dwindle down, getting closer to that dreaded last page I think up reasons as to why I can not continue to read at that particular moment, but yet, another part of me is saying stay put and finish it. Yesterday I had that inner turmoil occurring and I managed to drag the last six chapters over about five hours. The book took me over four days to read but that is mainly because I did not want it to end.

It begins with Amy's death and then you are taken back three days to show the lead up to those final events and then the aftermath. Like the previous books they are split up into groups to find out particular clues and in this book I found I was enjoying all three of the journeys. My favourite would still have to be Ian and Cara but that is mainly because of the love story intertwined between them and because Ian and his snooty ways makes me laugh so much.

I don't think this is the sort of book you could pick up and read if you have not read the previous three as you would be completely confused. They do not recap the story at all instead it just plunges in full frontal and the pace does not ease up at all. The previous books are mentioned but only key aspects and they assume you know what happened. The Outcast is revealed and you find out more about his disturbing background and the real reason why Grace tried to have him assassinated (and for a very good reason.)

Alek the assassin takes a more pivotal role in this book as well and his background is uncovered. I was really glad this happened as I always wanted to know more about him and why he had such a strong passion of hate towards the Cahill's (besides, of course the fact that Amy killed his sister indirectly). The whole thing was extremely predictable, but I am sure, for children it could possibly come as a big surprise to them.

One thing that I did enjoy with this book - that I am sure did not occur with the others, is character pictures appeared on various pages and it was so nice to actually have an image of the characters instead of the one I had made up in my head. It personalized it more. It actually left me wanting this to be made into a movie or a television series as the potential is definitely there.

I can honestly say the series, characters and the reasoning behind everything has definitely grown on me. It is a series I will be giving my daughter to read in the not near future. I would say it would be perfect for nine years and above to read. Its not technical at all and has a lovely smooth flow to it. The only real issue is the amount of chapters it has which were totally unnecessary. This book contained fifty chapters and in reality they could of squeezed it down to around thirty. But I do like how they mention where the chapter is taking place so you can automatically figure out what characters it will be revolving around.

As with the others there is a game you can play and this gives you more codes in saving the world. I had a quick play around when I read the first book and I did not have the patience for it but I am sure my girls would love it. All and all a great series and a great book.

I had already read the third book in this series so I was looking forward to reading this one - even though the titles are standalone, the characters are familiar the second time round so you get into the story more quickly. Like the third book, this one is fast moving and although there are three distinct stories unfolding at the same time, they constantly intersect and the momentum is never lost. It is really useful that each chapter starts by referring to the location so that it is always clear which thread of the story is being furthered. I am looking forward now to sharing the book with Mr 11 when I next see him as he is totally into books of this kind.

I think the format represents good value - it has a strong hardback binding which will withstand a fair amount of handling by various young readers, and endpaper graphics which hint at the disaster which is to be the theme this time round. The whole disaster theme that is basic to the series is one that appeals to readers, young and old alike. Everyone enjoys a good disaster: it brings out the ghoul in people, a fact that every news editor and movie director is well aware of! Couple this with what amounts to a family saga, warts and all, and throw in a strong element of science fiction, and you have a formula for success.

The main characters themselves are empathetic. Ian, Dan and Amy's distant cousin and the former head of the Cahills, has stepped down and willingly handed the leadership over to them. Dan, as the very young and very capable trouble-shooter, is every young person's dream hero. Although he is younger than his sister Amy, it is Dan who makes the running all the way through the book. For all his youth, he has a vision and embraces adventure and danger with courage in order to achieve his goal. Amy certainly does her share of courting danger but it is clear throughout that Dan is a worthy co-leader of the team.

Some of the other characters are also worthy of mention. Ham the strong, with his insatiable appetite, provides a little comic relief as he is always hungry! Alek shows that people can change in the most unexpected ways; and Cara, as the computer wiz, is often able to access information to fill in the gaps so the story can progress.

Finally, this is another book that links into an online game. Anyone who has enjoyed the story can go online afterwards and continue to explore the themes and check out different possibilities. There is a code printed inside the book which grants online access. This is certainly a great idea as it encourages the reader to go more deeply into the ideas presented in the book itself, thus enhancing the whole reading experience.

Score: 10.0
Product reviews for listing 6343: Ellie's War: Wherever You Are -  Author: Emily Sharratt

The second book in the personal and moving coming-of-age story set against the backdrop of the First World War. August 1915. Ellie's life has completely changed in the year since war broke out. She's been forced to leave school to work in the factory, and much worse, her family has received devastating news from the trenches. At least she has her best friend Jack. But then Jack runs off to war. Will Ellie ever see him again?