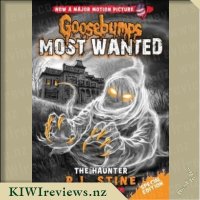 Sammy Baker is a quiet kid who wishes he wasn't so shy and timid. He is frightened but eager to prove he can be brave. On Halloween night, he follows his friend to the Marple House, an abandoned mansion on the other side of town.

Just past midnight, he feels a cold tingle at the back of his neck. The chill spreads across his body. It's unlike anything he's ever felt before. Soon, his whole head feels like a block of ice. He's about to scream - but the frigid sensation vanishes. Sammy doesn't realize that he has just met The Haunter...and that his nightmares are only just beginning.

Miss 12 is a staunch young woman who enjoys a good read, the scarier the better, so I thought she was the perfect person to share this book with. Normally I read a book before passing it on to someone else to get their opinion, but this time round she read it first. This was not too much of a challenge as she is a fast reader and if she is interested nothing will stop her until she has finished the entire book! That proved to be the case here: she disappeared outside on to the porch swing with the book and her dog and had to be summoned for dinner some time later!

I think it is a test of a book's ability to draw a reader in when it causes such concentration! The cover announces that the book is suitable for US grades 4-6, which is roughly equivalent to 9-12 years, but she did not find it was too young for her. Furthermore, on reading it myself, I thought the subject matter (if not the style) would be somewhat challenging for the average nine- or ten-year-old. She assured me it was not scary, but I would hesitate to offer it to her more impressionable younger sister (who has just turned 10).

As do other books in this series, this one deals with the supernatural. It is designed to make the young reader shiver with fright; although it did not have this effect on Miss 12 (ok, I did say that she is staunch!), it made me question whether it would be suitable reading for a younger or more impressionable child. We discussed it and concluded that the ending had not been what either of us expected; we were almost disappointed in the fate that was reserved for Sammy. He is portrayed as an unfortunate little boy who is teased by his friends and not supported by his family, so I think we were both hoping for a gentler outcome.

Stories about "loners" and "victims" often encourage the reader to get onside and feel affirmed when there is a happy-ever-after ending. After all, good stories are designed to make the reader have a feeling of satisfaction when the expected outcome is as it should be. Real life is seldom like that, however, and this story tries to bring this reality home to its young audience. Nonetheless, I am not sure that this is the best way to engage with a preteen reader. Miss 12 said the ending made her feel uncharacteristically disturbed, and I could see what she meant. Sammy should have emerged as a confident 12-year-old with lots of friends and the possibility of an incipient romance with Summer as they both got older. Instead, we were left with the uneasy feeling that all was not well with the world.

I originally requested this book for my daughter but as she currently in the middle of another book I had to read on my own. I got her to read the first chapter so I could gauge some sort of response from her and she said 'that she liked it and was interested to see what would happen next'.

The great thing about Goosebumps books are they are so easy to read, chapters are only a couple of pages long and usually there is enough entertainment to keep you interested. This book was no different and I found with a couple of hours I had it finished. As much as I enjoyed it I am not sure my seven year old daughter is ready for it and it deals with ghosts and the fact, in this case, that they are real. I am not sure I am ready for the conversations that it could lead to and also my daughter is rather a scaredy-cat when it comes to these sort of things. It is entertaining and it is aimed for kids and it felt like it was written by a kid as most of the pranks are extremely childish.

One thing I did not like was his parents reactions to everything. They never had much time for Sammy and even after there was the possibility he was going to be expelled from school they were more interested in going to a party then sitting down with him to discuss the whole situation. Even when he wanted to talk to his parents they just said 'not now' and 'we are not interested in talking to you today and when we do talk it will be us talking not you'. I actually felt extremely sorry for Sammy and hope I never turn out like that.

It also painted kids in general in a bad light that none of his friends were really concerned and instead of offering help they were laughing and encouraging his bad behaviour through absolutely no fault of his own. I am not sure it gives kids the best support for how to deal with bullying or in how to get help when it is required.

I have some hesitation with passing this on to my daughter and think I will put aside for a year or so until she matures some more. I think this would be better suited for the older readers as I am sure with this subject matter it will result in asking parents some questions. It is still a good read and I did enjoy aspects of it.

Love, life and everything in between. Midnight kisses and summer crushes, first dates and heartbreak - there's never a dull moment in Heartside Bay. This is the next not-to-be-missed instalment in the lives of Lila, Polly, Eve and Rhi.

After Eves father was arrested in front of half the town, now she must prove he is innocent.

But as Eve fights for her family, she will also discover things about herself that will change her life forever......