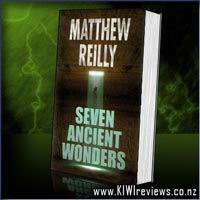 Thousands of years ago, a magnificent golden capstone sat atop the Great Pyramid of Giza. It was a source of immense power, capable of bestowing upon its holder absolute global rule for a thousand years-
But then, in 323 BC, the capstone was broken into seven pieces and spread to the corners of the Earth, hidden within the Seven Ancient Wonders of the World. Now, with the coming of a rare solar event, the time has come to locate the pieces and rebuild the capstone.
Everyone wants it. From the greatest, most powerful countries on Earth, to gangs of evil terrorists- and one daring coalition of eight small nations who think no single country should possess such an awesome power source. And so, led by the mysterious Captain Jack West Jr, this determined group enters into an adventure beyond imagining.

The Veil of a Thousand Tears
Rating: 9.0

Cower in fear, Cry in despair,
You wretched mortals,
For that which giveth great power,
Also takes it away.
For lest the benben be placed at sacred site,
On sacred ground, At sacred height,
within seven days of the arrival of Ra's prophet,
At the high point of the seventh day,
The fire's of Ra's implacable destroyer will devour us all.

How can I articulate the way I feel? A feeling so strong, dare I call it love? Not quite.
In all honesty, I don't know how to describe this book. What I do know is this: This is the best Matthew Reilly book I have ever read. In fact, if it was possible, I would rate this book 11 out of 10. Reilly really performed in the writing of this novel, to the point where I was literally losing sleep with this novel, my school work suffered, purely because I found it very hard to put down. This book really took my breath away, as well as increasing my ability to read while walking. (ahh- those lonely mornings walking to school, Matthew Reilly what would I do without you?)
I can find very few faults with this book. The main one being the fact that MR got the machine gun on the Apache helicopter wrong. Small things.
This is a great novel, but I suppose after reading it three times over the last week I had better start reading some of my other review items- ah what the heck! One more time before I go to bed can't hurt-
But I do struggle with one more question: Matthew Reilly, I honestly can't choose between Shane Schofeld and Jack West Jr. as to who I want to be the star of the next novel. Will the two ever meet in a future novel?

Filled with treacherous tyrants, brutal buccaneers, evil emperors and violent villains, it's full of foul folk you wouldn't want to meet in a dark alley - but who are great to read about on a dark winter's night.